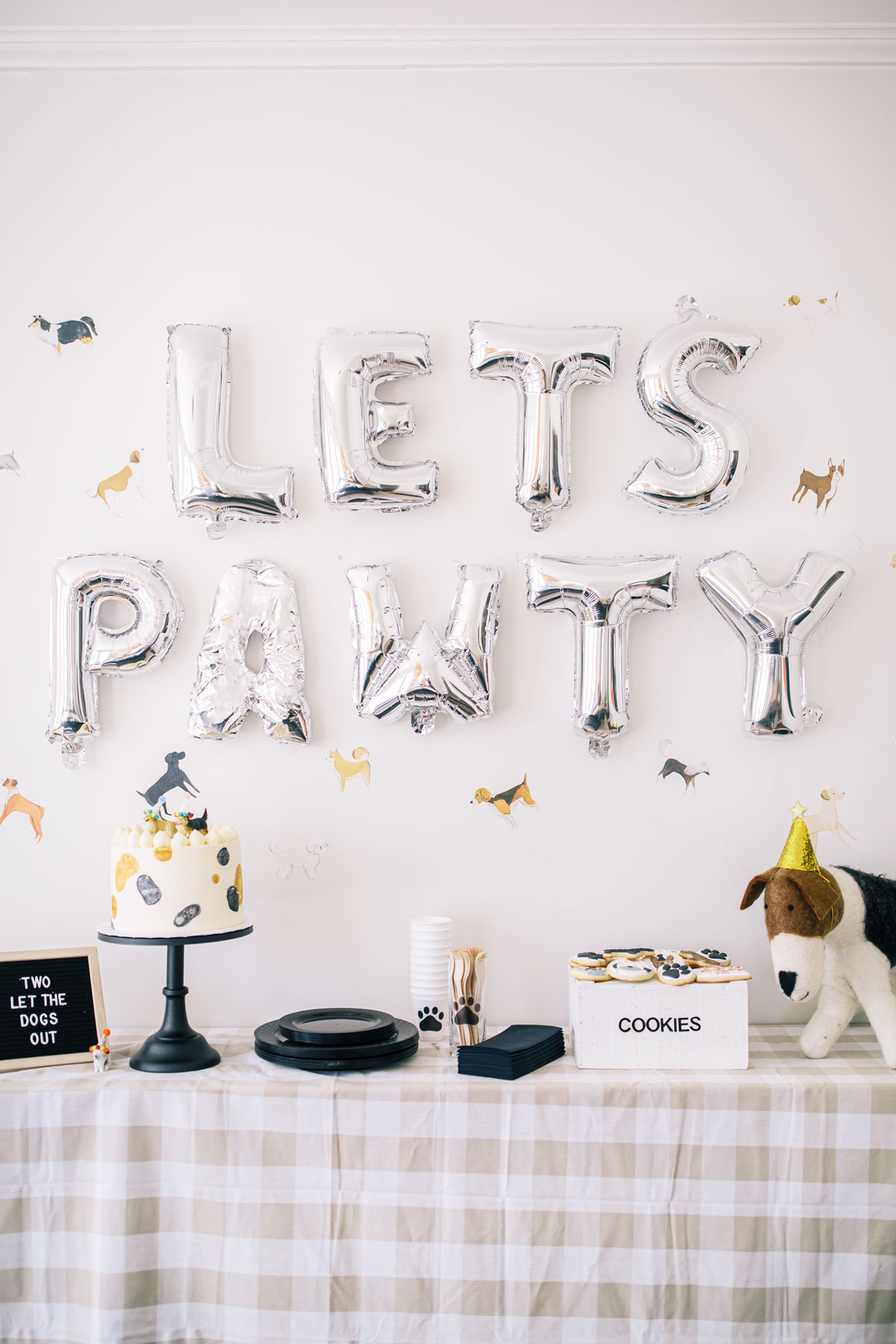 YOU GUYS I am so excited to be sharing Edwin’s “TWO Let the Dogs Out” themed birthday party with you today. Back in January (I think it was) I asked for some of my follower’s advice on a Two pun themed birthday party, and when someone suggested “two let the dogs out” I knew it was the one. Edwin LOVES dogs and his dog, Milo, so this party theme was a no-brainer. I took to Pinterest and found so much inspiration for dog-themed birthday parties and took some ideas here and there and came up with what I think is a truly amazing looking party for our (not so) little Edwin Fox. Keep reading to see how I put this together and all of the little details that went into his party (and yes, it was under 10 people, haha!).

Above: I wanted a muted colour palette so I did black, white and neutral brown tones. I love how it looked chic but still kid-appropriate. The “Let’s Pawty” sign in silver added a little sparkle and some dimension to the wall (ps: if the “A” looks a little wonky its because it decided it pop on us while we were filling up the balloons and we had to stuff it with toilet paper to make it sort of work, haha!).  I also added some dog wall decals I found on Etsy. These were the biggest investment in regards to budget but I put the decals up in Edwin’s playroom after the party so they are getting their use. The table features mostly black serveware. The cakestand I found on Amazon and the plates, cups and utensils are from Dollarama. The napkins were found at Ikea. I added paw print decals I found on Amazon to add some detail. The letterboard is from Dollarama. 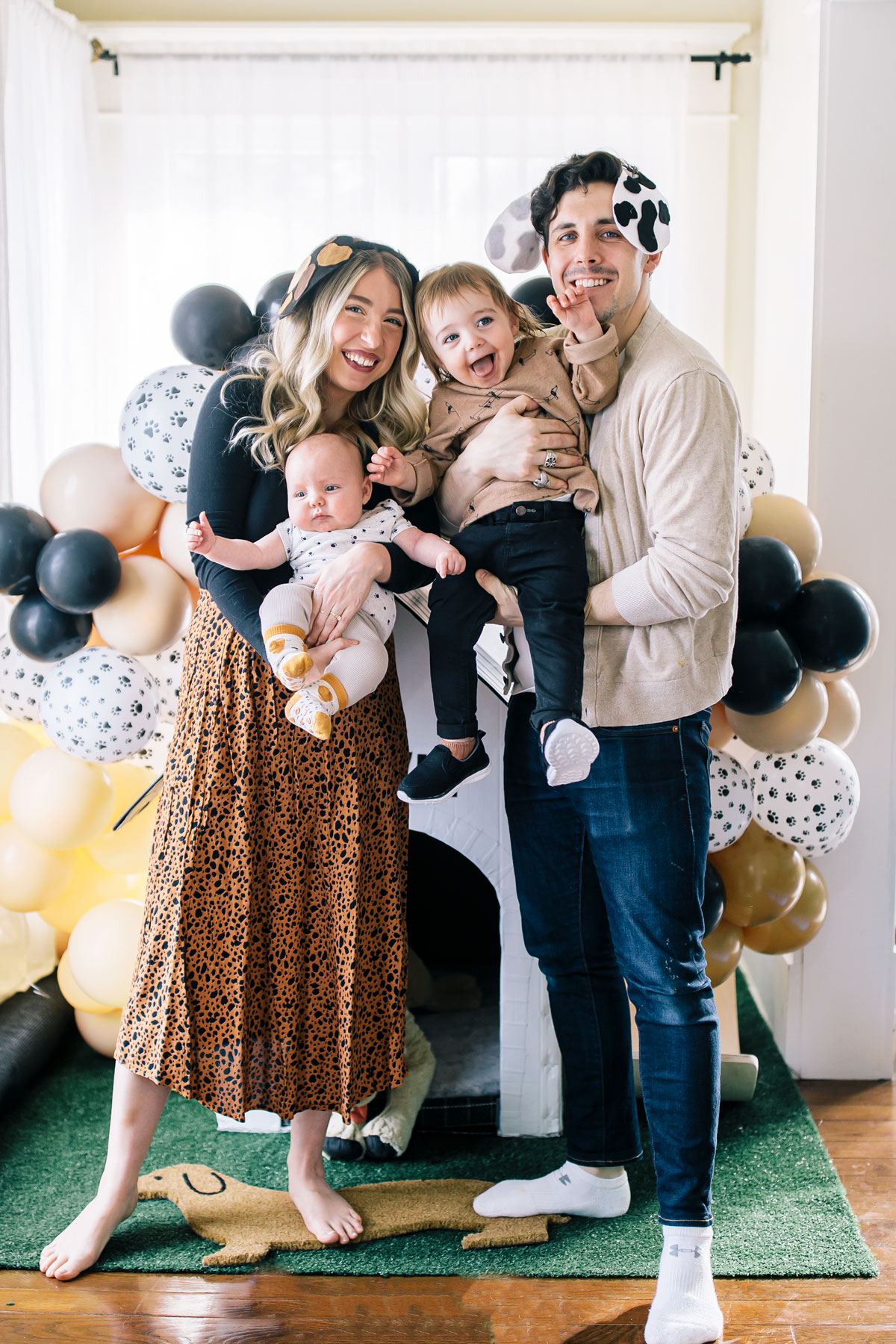 I coordinated all of our outfits and got SO lucky when it came to finding cute dog-themed clothing. My spotted skirt was found on sale at Gap for $15, Edwin’s Shirt was on sale at Zara for $10 and I found Ellers socks on sale at Zara for $3! My mom found Eller the sweetest pack of dog-themed onesies the day before the party and I put him in the paw print one (thanks, mom!). Jamie made his t-shirt and it says “easily distracted by dogs.” 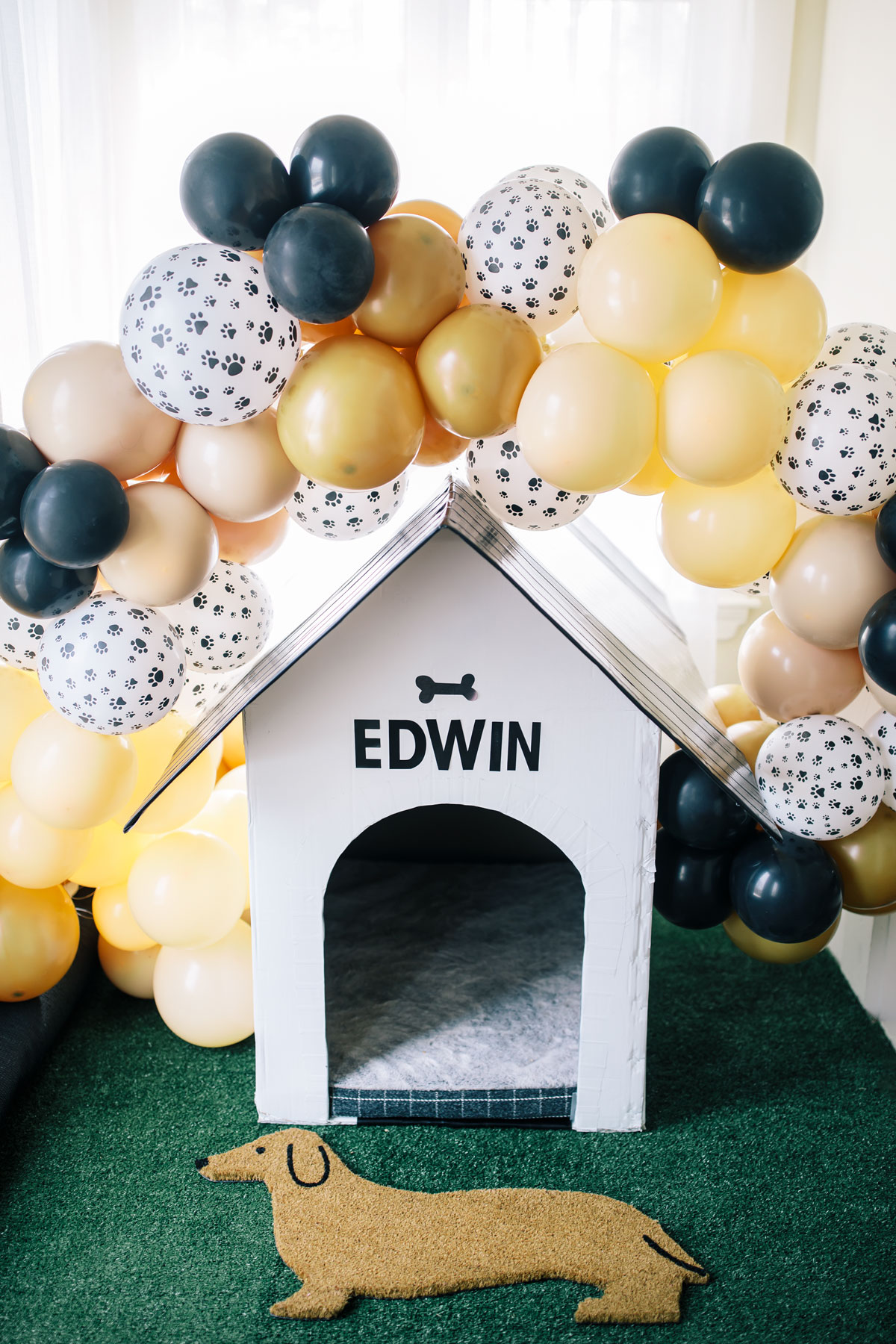 Jamie and I (okay 99% Jamie) made Edwin this adorable dog house. I found the directions here and otherwise we made it our own by spray painting it white and taping the roof with black electrical tape. I added stickers to spell out “EDWIN” that I found at the Dollarama and the dog bone is a wall decal from Amazon. The Weiner dog carpet is from Linen Chest, but I think it has since sold out. I also borrowed the green turf grass from my mom and the dog bed inside from milo, haha!

Normally I would make my own balloon arch, but it is very time-consuming and with a newborn baby, I was not up for the challenge, haha! Luckily, Baldoria Party Shop does an even better job than I would have and made this custom neutral-toned with paw print balloons arch to go over Edwin’s dog house. it is so much fun and adds something really special to the party! The arch is still thriving and currently hanging in Edwin’s playroom. 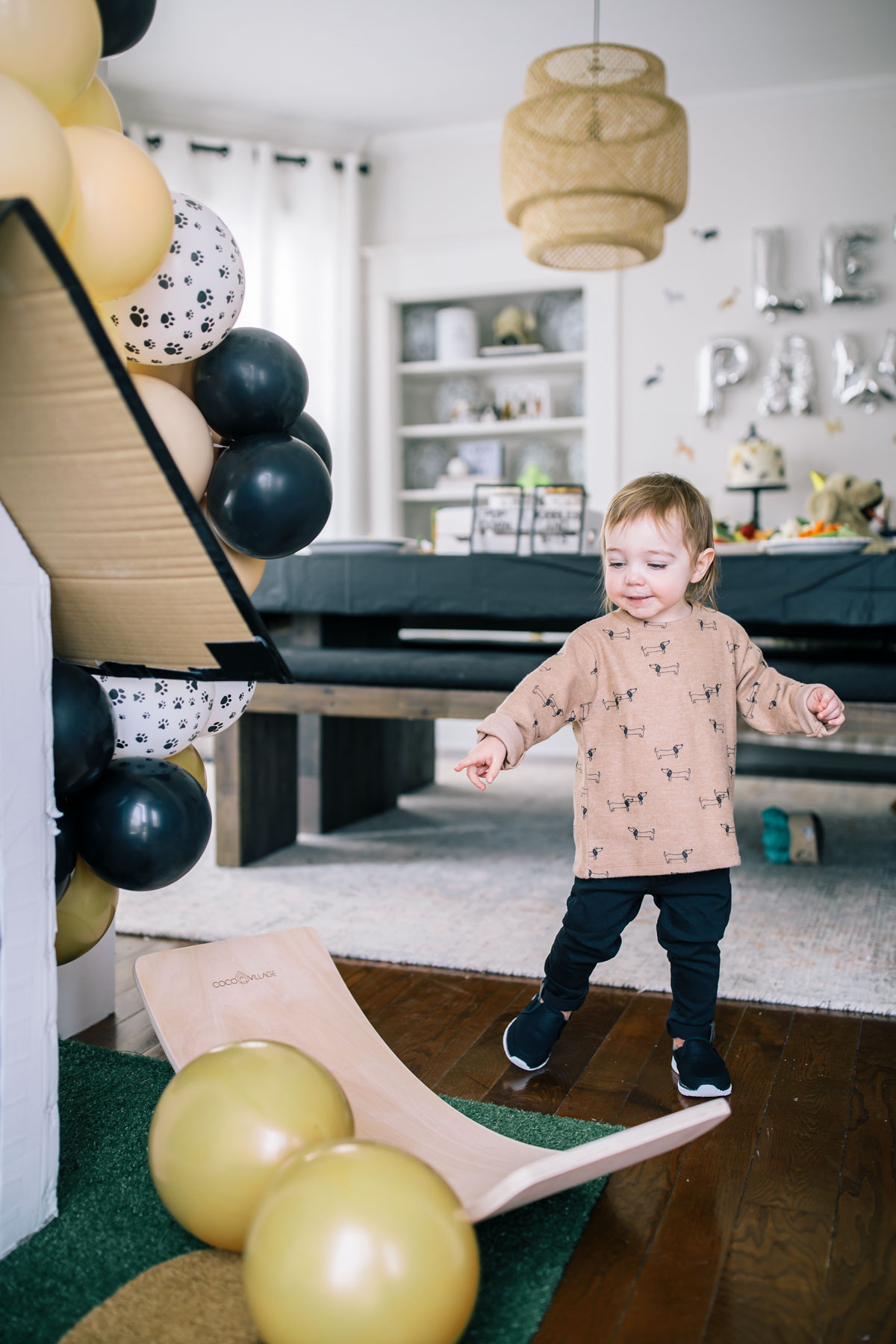 We gifted Edwin a balance board as his birthday present. While I think it is super cool, he seems to only be interested in using it as a ramp so far! I’m sure he’ll get a ton of use out of it as he grows though! 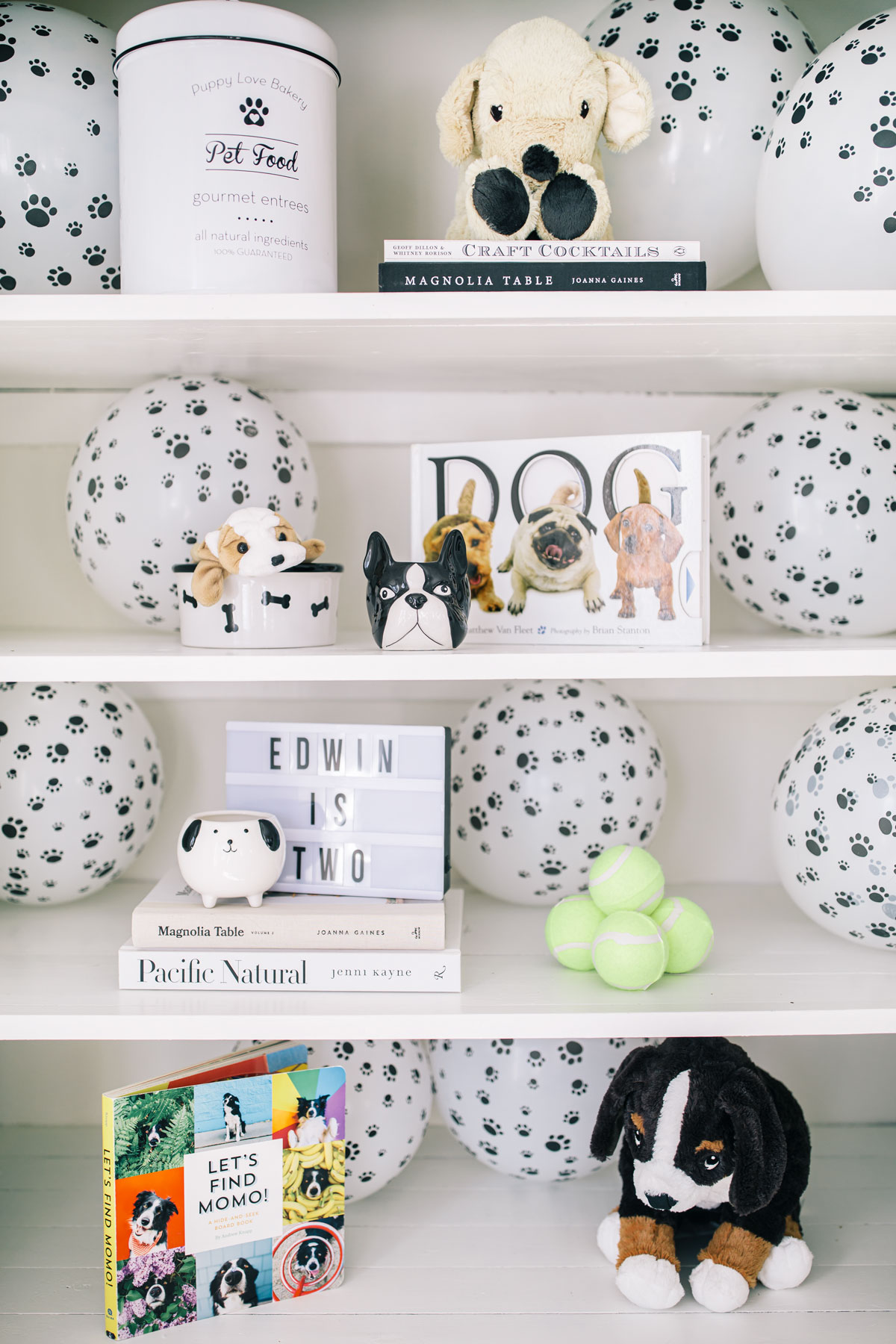 I always style our built-in for parties and this is what I came up with for the party. The paw print balloons fit into the back of the built-in perfectly and added some nice dimension and fullness (they’re from Amazon.) The books Edwin already had, stuffed dogs are from Ikea, tennis balls are Dollarama. The TY dog bulldog was my nannies and the dog bowl/treat tin were found at Homesense. The dog head planters are from Linen Chest. 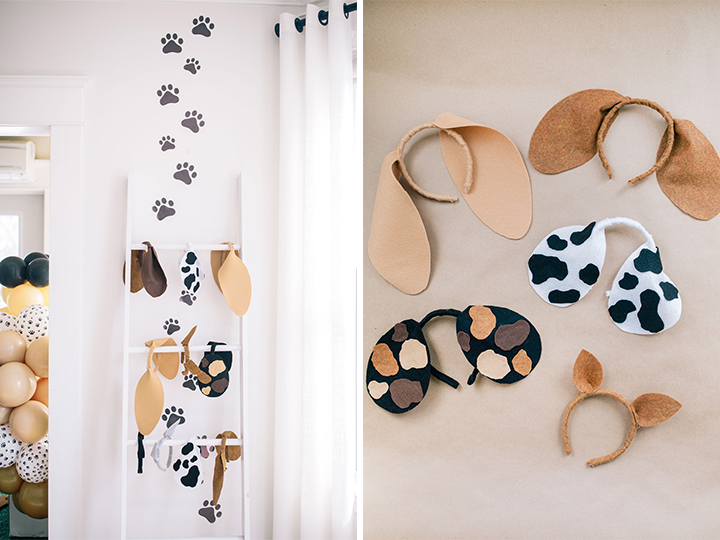 I found paw print decals on Amazon and put them on the wall adjacent to the built-in and leaned a ladder against it to hold the dog ears I made for everyone to wear. The dog ears are 100% inspired by A Beautiful Mess and you can find the tutorial here. 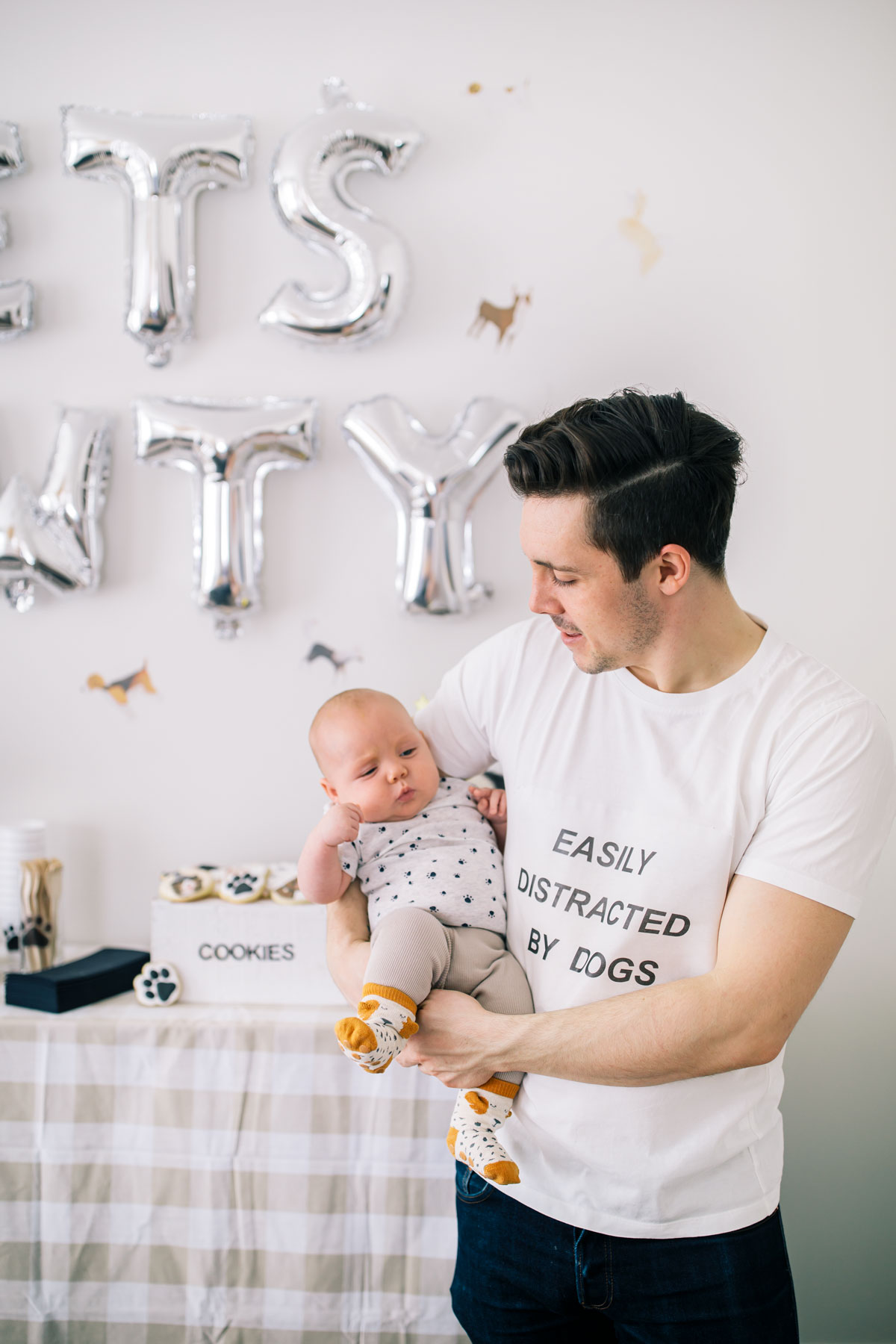 Daddy and his smallest pup. 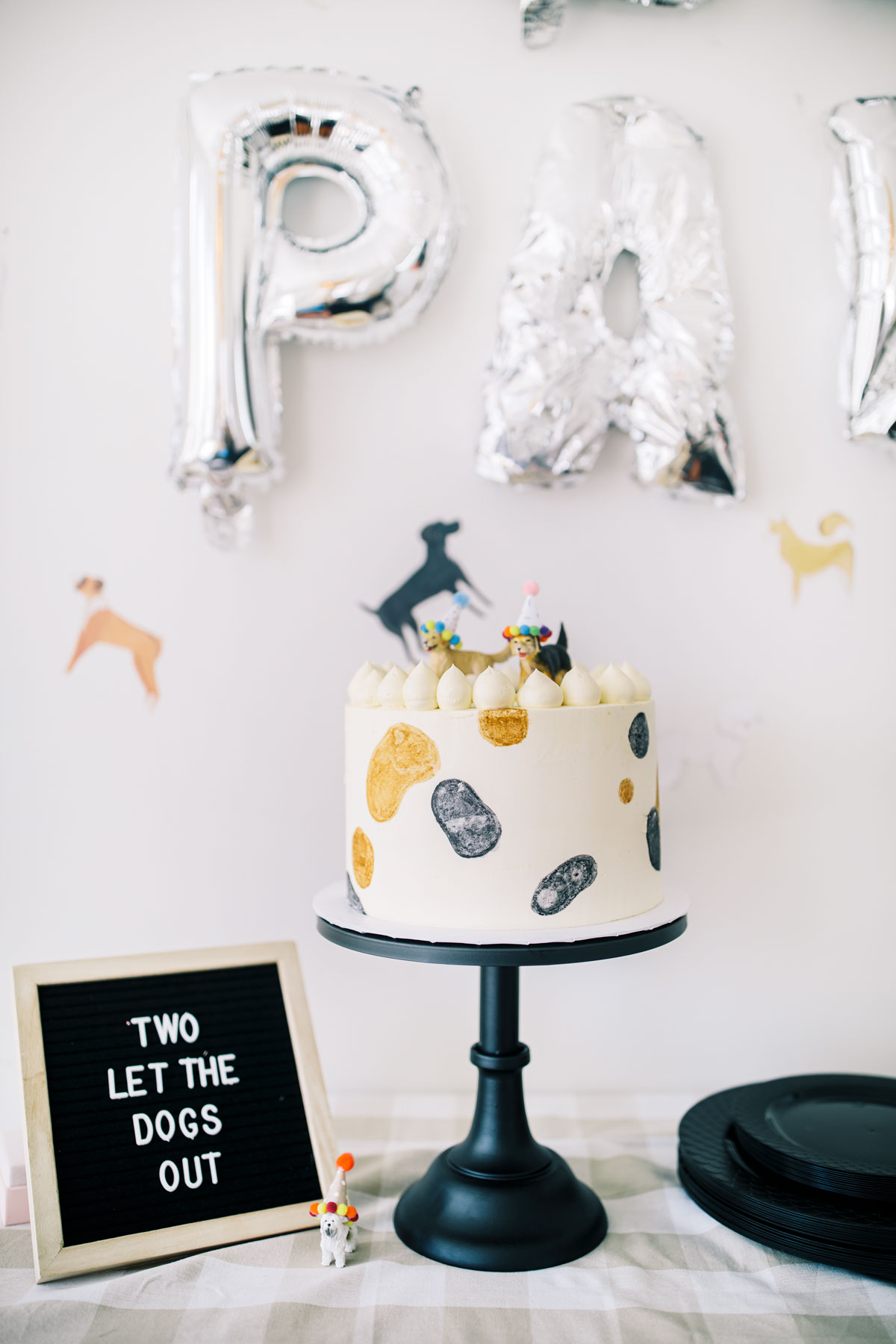 I literally can’t with the cake by Buttered Bliss. I gave her a very ruff idea of what I wanted and she just knocked it out of the dog park, haha! OBSESSED 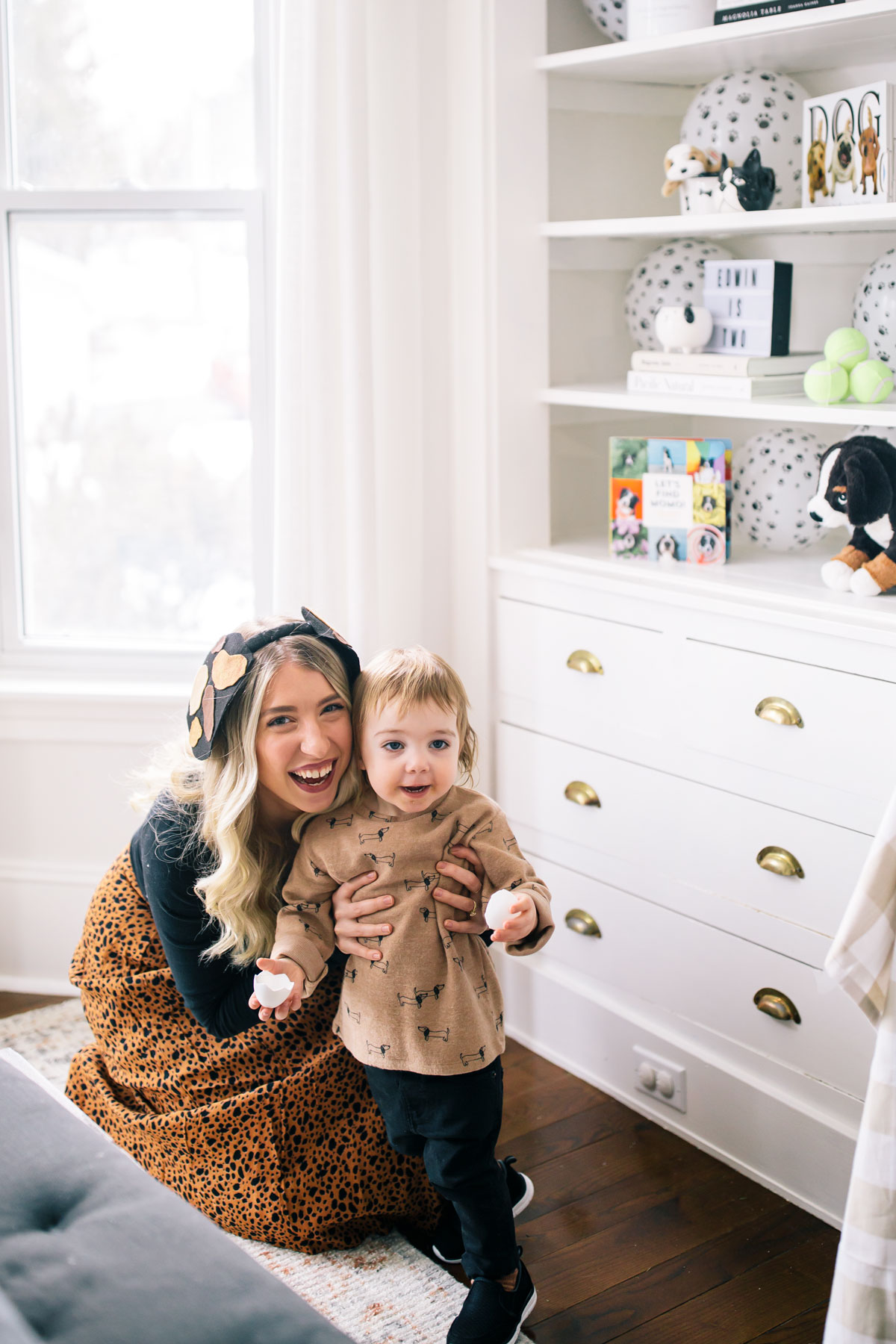 My big 2 year old birthday boy and I. 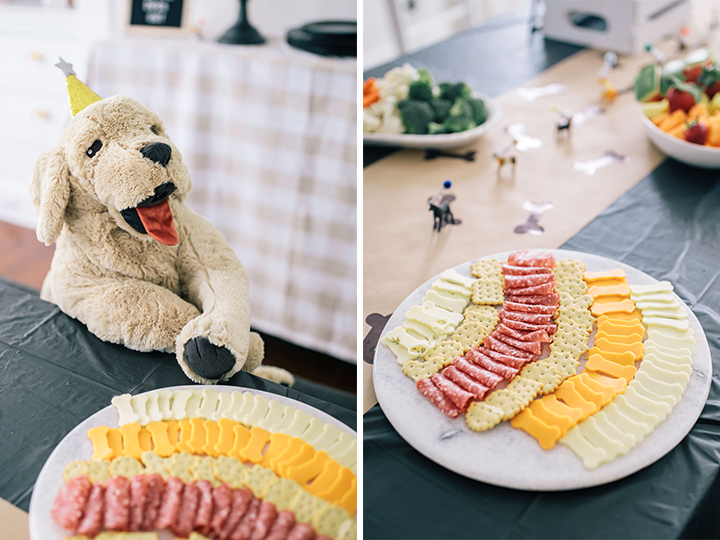 My sister cut out all of this cheese to look like dog bones and it turned out SO cute! This large dog is from IKEA and we added this little party hat on his head. He was clearly starving, haha!

PS: Funny story about this dog. We have bought the smaller version of him for Milo since he was a puppy. He’s probably gone through 20 at this point. It is Milos most favoruite toy. We also rightfully named him “Phil” as an homage to Milos’s name before we adopted him. 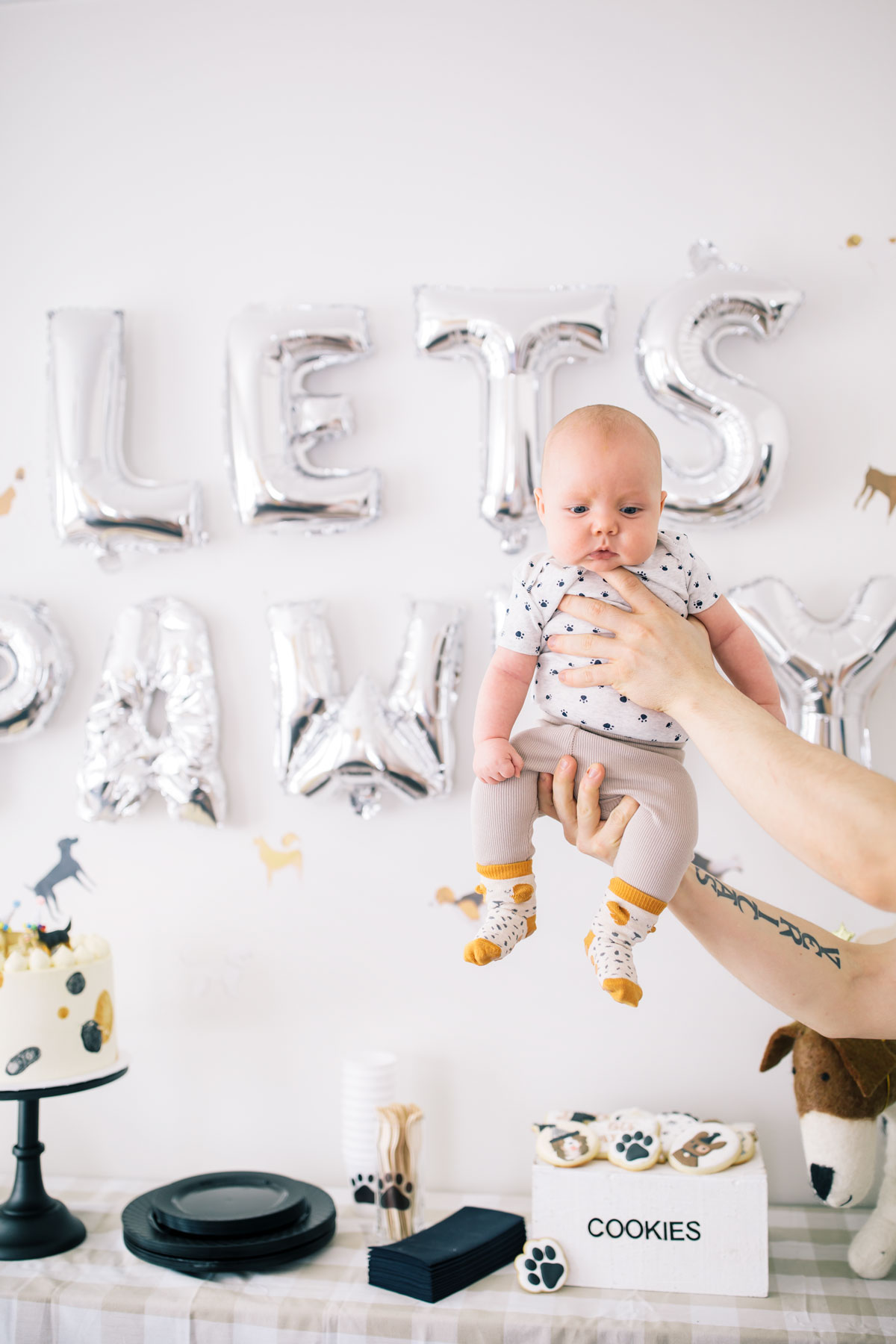 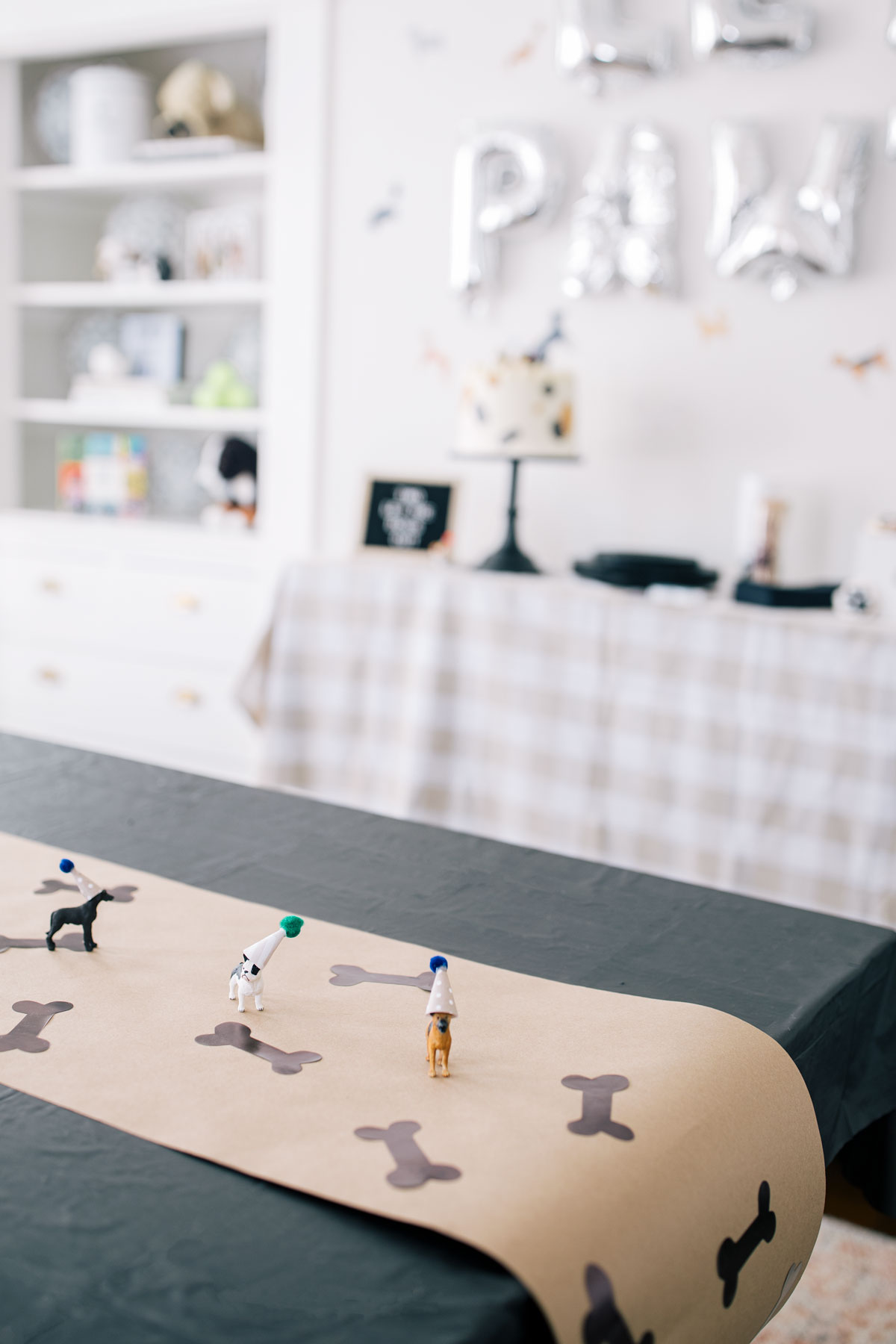 My sister and I made this table runner using brown packing paper and simply added the dog bone wall decals on top. I used a plastic black tablecloth underneath. I then lined the table runner with toy dogs that I made party hats for. The tutorial is here. 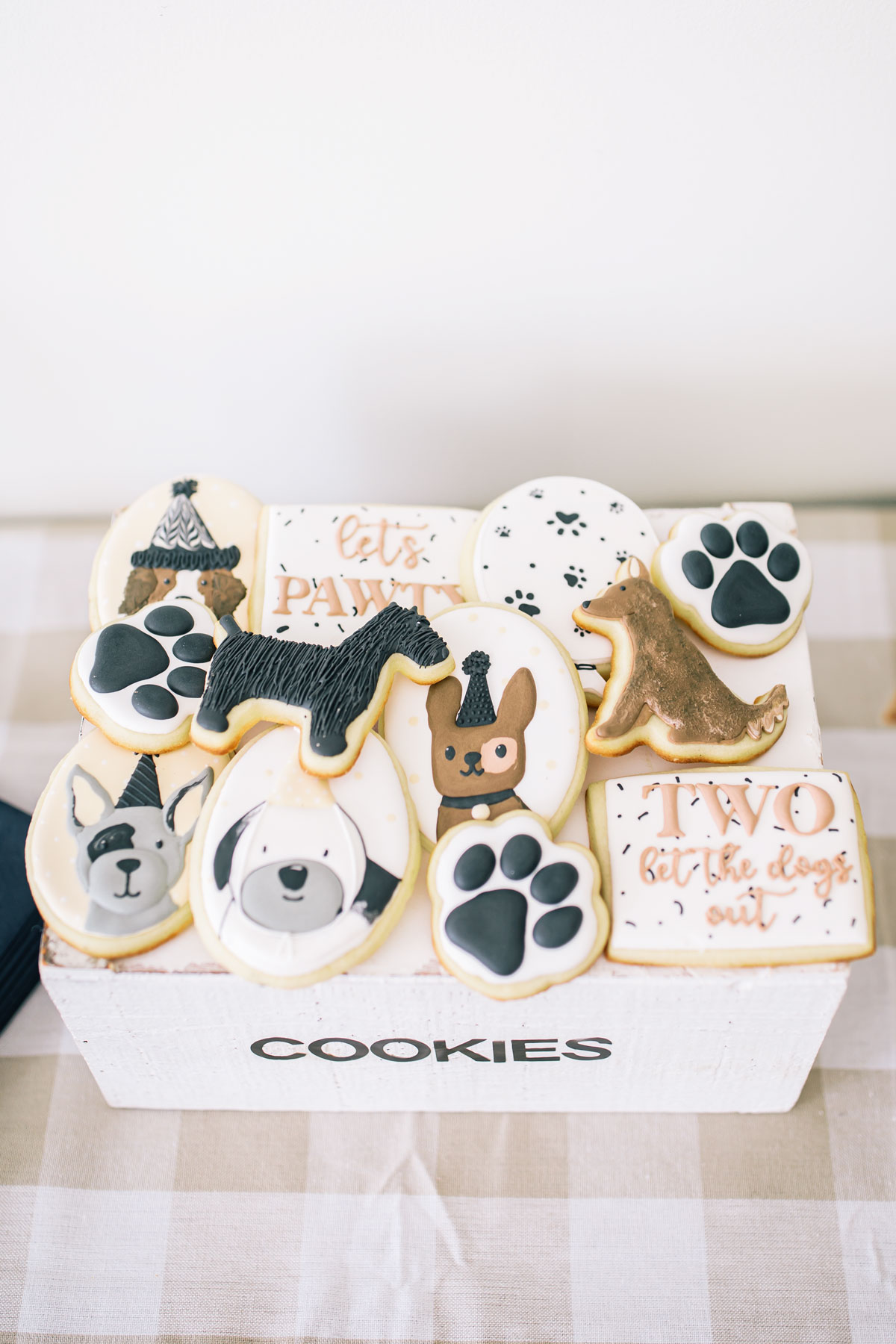 Liddy Mae Custom Cookies nailed it yet again. I’m obsessed with these!

I used letter stickers from The Dollarama to write “cookies” on a wooden crate I already owned. 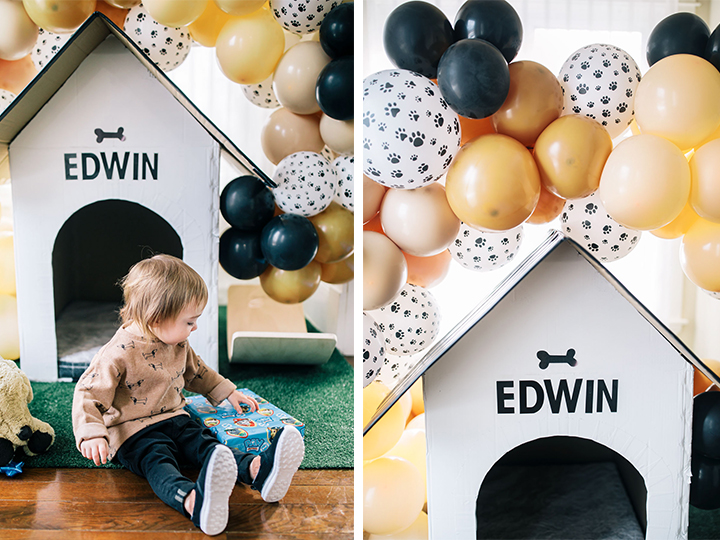 Edwin opening up one of his gifts. Edwin loves Paw Patrol right now so he got a lot of PP themed presents, haha. 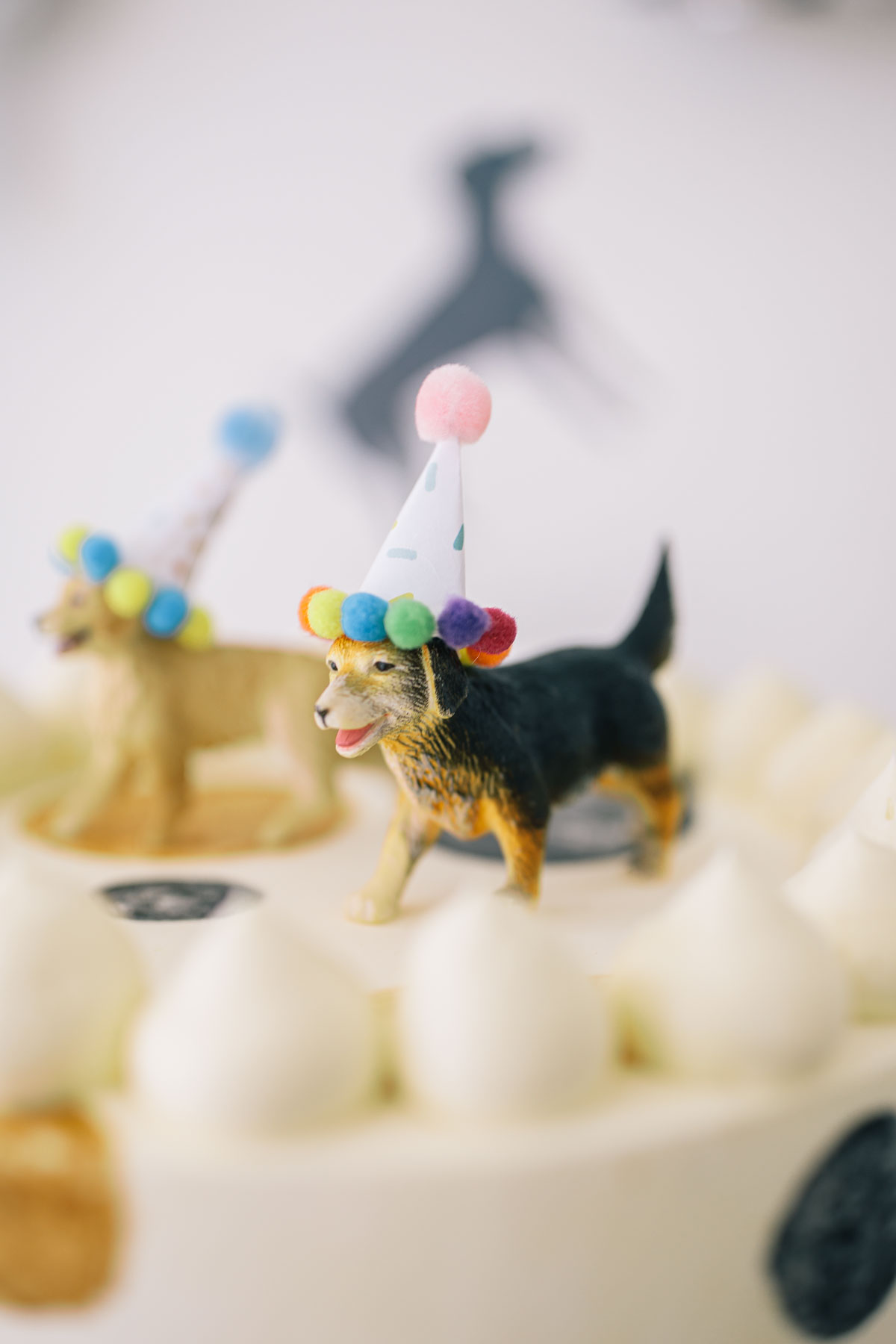 The cake topper party hats were a little more special than the ones that lined the table. 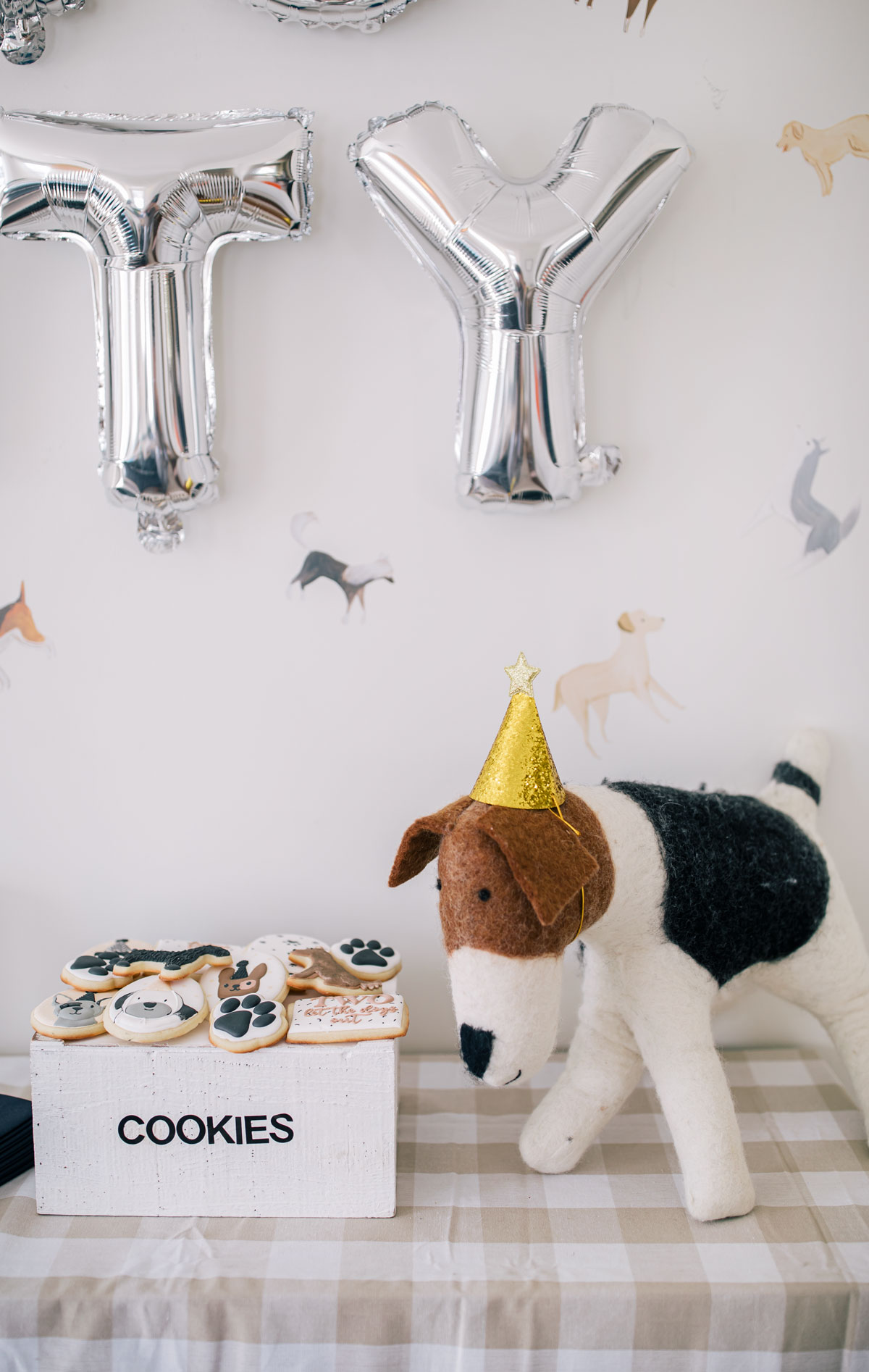 This stuffed dog was actually the first thing we ever bought for Edwin when I was pregnant with him because it reminded us of Milo. It rightfully deserved a spot at the party! 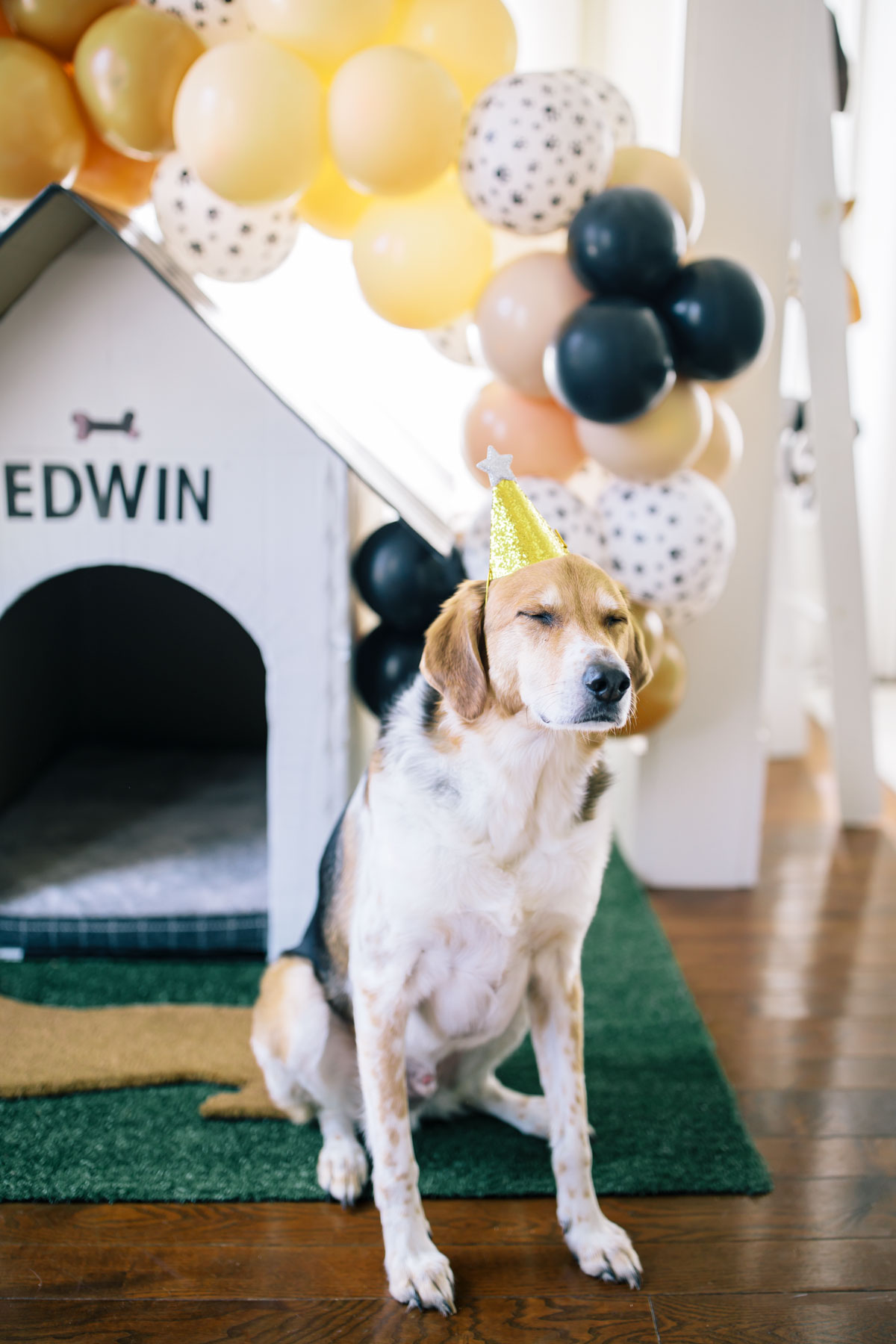 The second guest of honor next to Edwin. 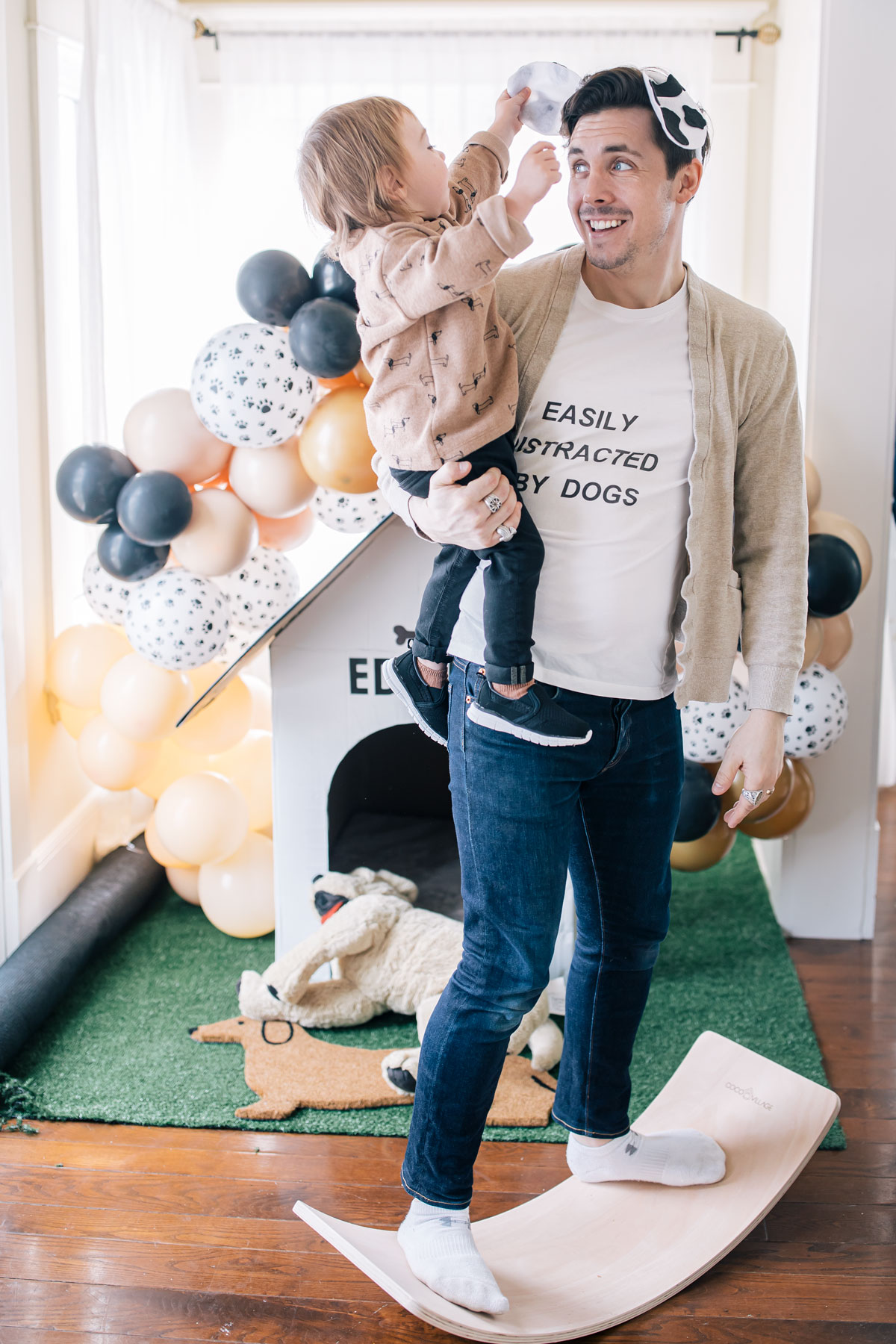 I love this capture of Jamie and Edwin. I think daddy was having more fun on the balance board than anyone, lol! 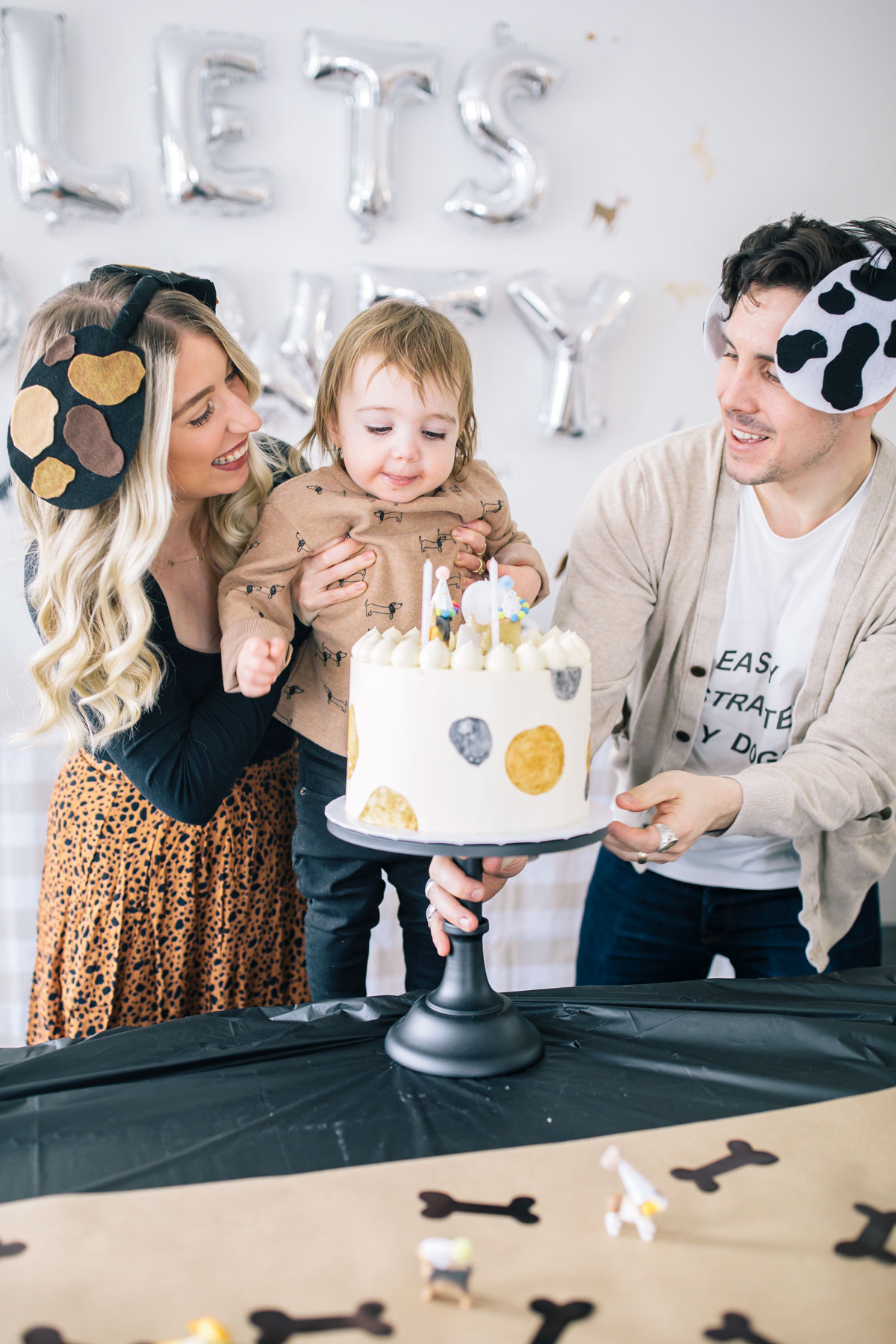 Blowing out Edwin’s cake! He kept requesting to do it again after blowing out the candles.

What Makes Me Feel Confident

How To Create Your Very Own Living Room Sanctuary

This Is What Dreams Are Made Of