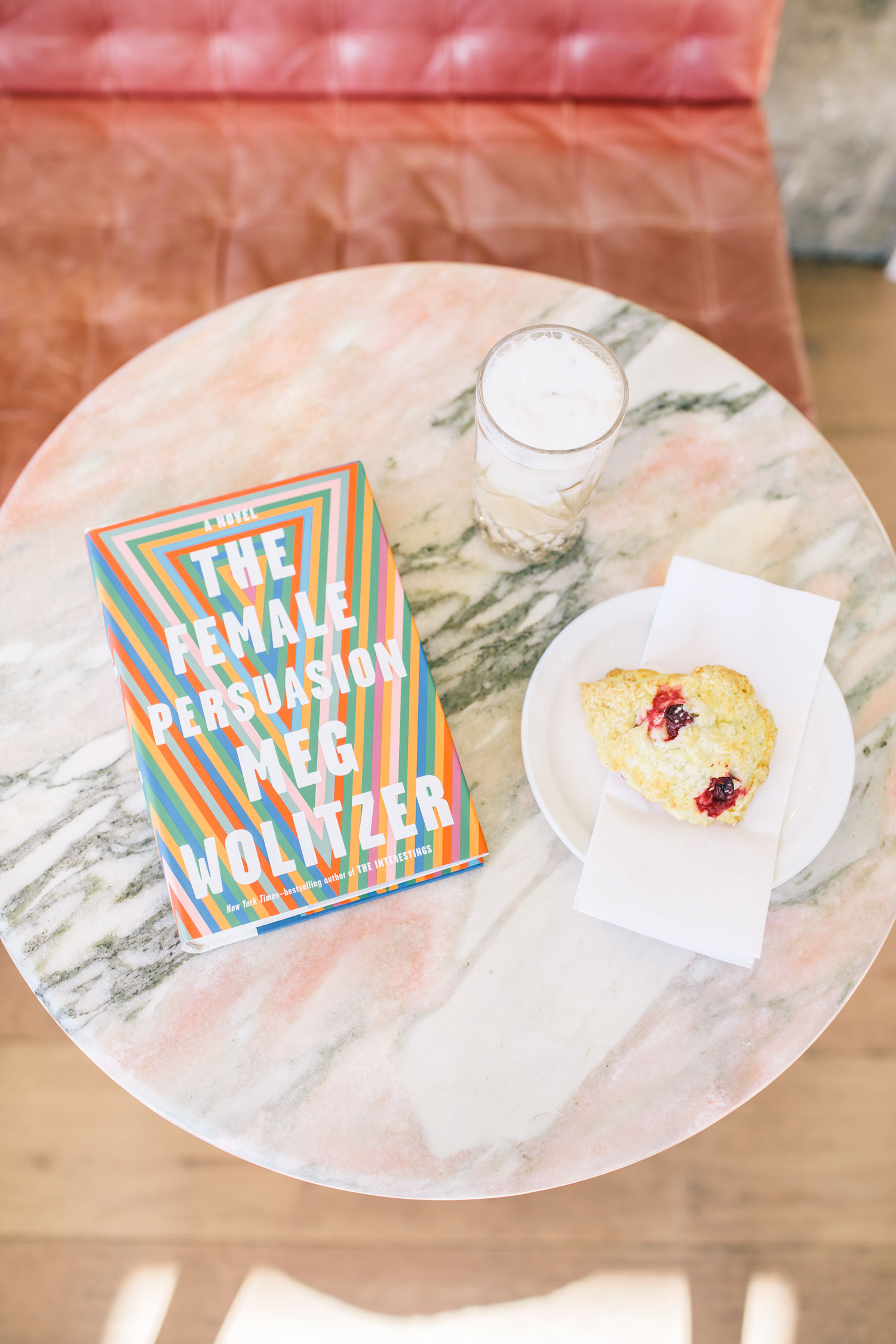 Well, well, well…we’re back with another, albeit very late, book club review for summer 2018…Just in time for fall, haha! We had planned on sharing this review back in late July, and then wedding planning sort of took over my life and I pushed reading this book back and back. Now here we are, mid September and I’m just sitting down to write this review (Thanks to Lorielle and Raelene who DID have this book read on time). Unfortunately, because I was so late getting this review up, we’ve decided to forgo Welcome To Lagos and end the bookclub up here today with The Female Persuasion by Meg Wolitzer

1. What did you expect going into the book? Did it meet your expectations?

Kaylee: From the beginning, I was very drawn to the bright colours of this book and the bold text so I admittedly judged The Female Persuasion by its cover. Truthfully, I was also pretty intimidated by the size of the book and just like I anticipated, it took me much longer to read than I wanted. I expected to finish The Female Persuasion feeling very inspired by the female relationships and mentorships that I had initially assumed this book was about. However,  that’s not exactly how I ended up feeling. Aside from my assumptions being incorrect, I did enjoy reading this book and learning the perspectives of each character.

Lorielle: To be completely frank (Faith Frank lol) I was not totally sure what to expect going into this book. I had never read anything by Meg Wolitzer before and the synopsis on the book jacket was pretty different from the books I’m used to reading. With that said, I did expect a sense of empowerment or inspiration from this book given its focus on feminism and female mentorship. I’m not sure that I found this book particularly empowering or inspiring but I do think that it was an interesting study on the dynamics of female mentorship, female friendship, and what it’s like to be a woman entering the work force in contemporary times.

Raelene: I expected this book to follow the main character Greer throughout her life, showing the impact Faith Frank had on her. I was expecting the book to have Greer as the main focus. The book did follow Greer throughout her twenties which was interesting but I was left wanting to know more. I wasn’t expecting the chapters to be written in different perspectives. Although I must say I liked this aspect of the book, as I got to know the characters better.

2.Do you have a favourite quote or passage from the book? What is it?

Kaylee: “You know, I sometimes think that the most effective people in the world are introverts who taught themselves how to be extroverts.”

Lorielle: “I think that’s what the people who change our lives always do. They give us permission to be the person we secretly really long to be but maybe don’t feel we’re allowed to be.”

Raelene: Yes, one of my favourite passages from the book was: “I think there are two kinds of feminists. The famous ones, and everyone else. Everyone else, all the people who just quietly go and do what they’re supposed to do, and don’t get a lot of credit for it, and don’t have someone out there every day telling them they’re doing an awesome job.”
I liked this passage because it referenced the idea that everyone can make big changes, no matter their position in life.

3.In the movie, who would play the major roles?

Lorielle: Hmmmmmmm good question! I think the role of Greer could be played by Lilly Collins. I think Tyler Posey would make a good Cory Pinto. As for Faith Frank, maybe Julianne Moore?!

4. Was the ending satisfying?

Kaylee: Unlike Lorielle and Raelene who didn’t love/really remember the ending, I’m a romantic at heart and really liked how everything played out positively at the end. I don’t think it was a “fairy tail” ending by any means but I’m glad most everything seemed to work out for the main characters in their careers and personal lives.

Lorielle: Honestly, I can’t remember how this book ended…I think that probably means that the ending was neither satisfying nor dissatisfying for me. This ambivalence I feel isn’t only towards the ending but the book in general too. The whole thing was just kind of “meh” to me.

Raelene: I personally thought the ending of this book was a little rushed and a little too along the lines of a “happily ever after”. I think I would have liked a more complex and realistic ending. I read this book a few months ago and to be honest i’m kind of struggling with remembering how it even ended, if that tells you anything.

5. Do you think this novel did a good job addressing feminism and female mentor ship?

Kaylee: I think that the author did a good job of addressing women in the workplace, female mentorships and fostering female relationships. However, I do think there should have been more diversity throughout this book.

Lorielle: I think this book did a pretty good job of addressing a certain type of feminism (i.e. white, middle-class feminism). While intersectional feminism is alluded too and while there is a little bit of diversity with the main characters, I couldn’t help but feel that Wolitzer was merely making these characters to check off a “diversity box”. They seemed superficially constructed to me somehow. I think writing diverse characters re: race and sexuality is super important but I think there is a right way and a wrong way to do it (especially if the author is seemingly straight and white). Wolitzer’s attempt is ultimately in the “wrong way” category for me.

I also find it unfortunate that in a book about cultivating female relationships and female empowerment that the two main characters, Greer and Faith, have an unreconciled falling out. I’m not exactly sure what this falling out is intended to say about female mentor relationships but it doesn’t appear to be a positive message. Maybe I’m missing something—or maybe I’m just forgetting what the book was about—but I think this is a disservice to the representation of female mentorship.

Raelene: I do think the book did a good job of addressing female mentorship. There were inspiring moments and frustrating moments. I also like the female characters were flawed, especially Faith Frank. It speaks to the truth that your idols are just as human as you are. As for addressing feminism, it obviously did this but I think intersectionality could have been stressed more. I believe feminism isn’t really feminism if it’s not intersectional.

6. Overall, would you recommend this book and why?

Kaylee: I enjoyed reading this book, but it definitely wasn’t a novel that I was rushing to pick up at the end of each day. I think there are books that better address feminism out there, but I did find myself invested in the characters lives and so for that, I’d give this book a go.

Lorielle:  Overall, I’m not sure that I would recommend this book…but I’m also not sure that I wouldn’t recommend it.  I didn’t hate this novel but I also didn’t love it and I’m not quite sure why. It is well written. I like some of the ideas in the book. I think most of the characters are interesting (though slightly superficial). All things considered it is generally a good book. For some reason though I was just unable to connect with it in any sort of important way. With that said, it is possible that other people may connect with it. So, if it looks like an intriguing book to you, I say go ahead and read it!

Raelene: I would recommend this book, I really enjoyed reading it and emerging myself in the character’s lives. It definitely isn’t my favourite book but I think it’s worth a read.