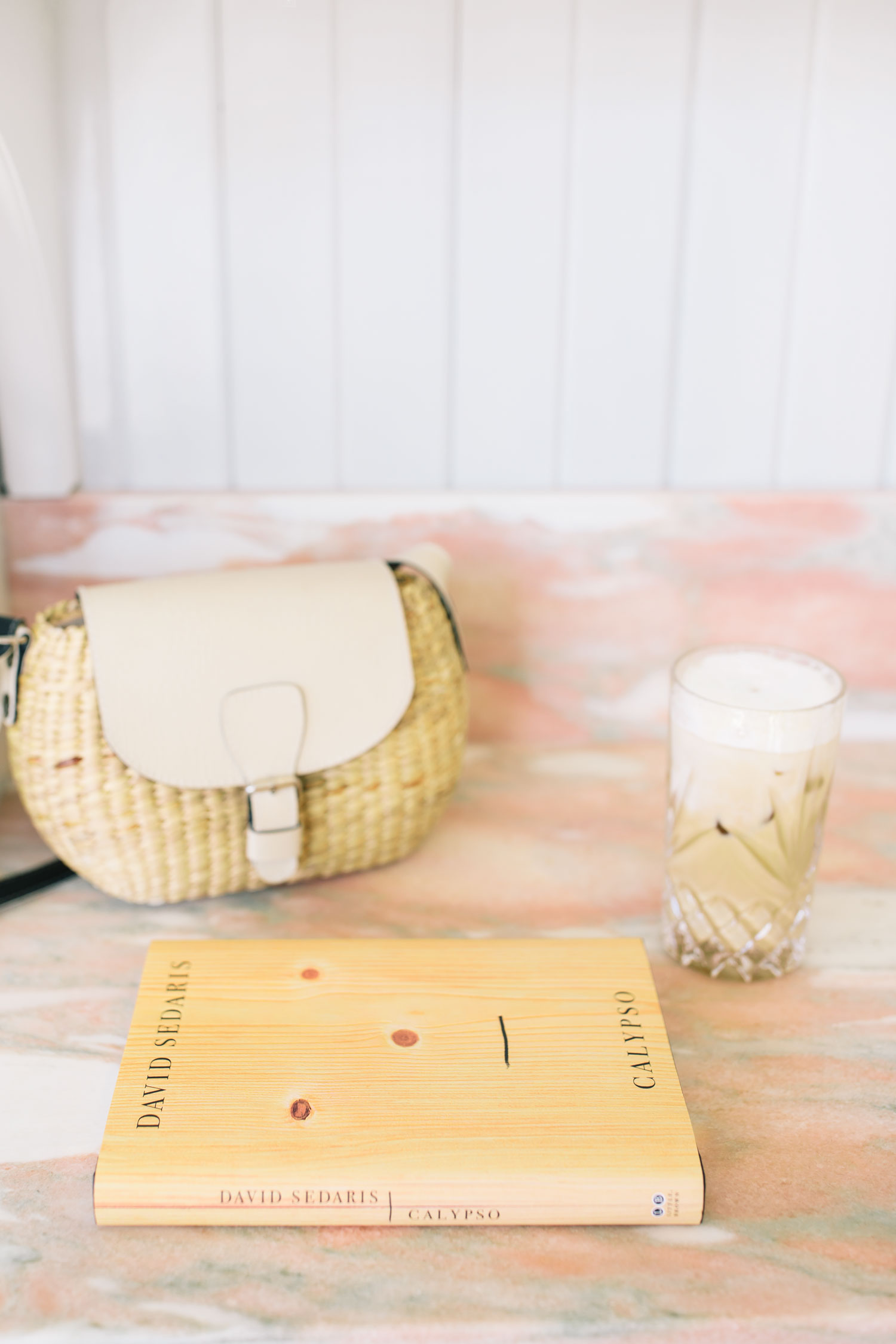 For our first book club read of the summer, we chose Calypso by David Sedaris. Described as a beach read for people who detest beaches, Calypso is a collection of essays based on Sedaris’s life that all meld together to tell one hilarious, and at times, dark and self deprecating, story of this middle aged author. Calypso felt like the perfect first book to ease into our summer book club and with that, here’s our review.

What did you expect going into the book, did it meet your expectations?

Kaylee: After reading the synopsis “a beach read for people who hate beach reads, required reading for those who loathe small talk and love a good tumour joke” I expected Calypso to be unapologetically dark in humour…which is exactly what I got. Personally, I’m a huge fan of morbid, dark humour and I loved how off-side Sedaris could be with the things he thinks and says. However, he writes so eloquently and with so much wit that he makes even the most morbid jokes (think death, feeding a tumour to an already diseased turtle, etc) seem okay. This book didn’t meet my expectations in that I wasn’t sure what to expect other than dark humour but I would say it exceeded my expectations in that I absolutely loved reading this book.

Raelene: Based on the synopsis and reviews of Calypso, I was expecting to be constantly laughing throughout this book. While I did find the book quite funny, it wasn’t “laugh out loud” funny in my opinion. However, I really enjoyed the dark humour and definitely caught myself smirking a lot, especially while reading the more self-deprecating essays.

Lorielle: Simply put, I expected this book to be funny. Having had a taste of Sedaris’s writing style from a previous essay of his that I read, I knew that his writing was humorous. I figured Calypso would be no different. Calypso was in fact very, very funny and I found myself actually laughing out loud during some parts.

However, Sedaris’s particular brand of morbid/dark/absurd humour is not something I was totally expecting. He touches on some pretty heavy themes/life events, using humour as a backdrop to tell these stories and make them digestible to the reader. I absolutely loved this about Calypso. I’ve always been a fan of dark-humour in general and Sedaris has seemed to master the art of the tragi-comedy in retelling stories from his own life in his newest collection of essays.

Do you have a favourite quote or passage from the book? What is it?

Kaylee: There are so many great passages and quotes from the book but I think one of my favourites was surprisingly not funny but rather a tender-ish moment between Sedaris and his father. In the last chapter, Sedaris and his sister are visiting their father who seems to be aging by the day. Davi’ds father gifts him a few postcards that he thought he might like and while Sedaris later ends up tossing them at the airport,  he graciously accept the gift saying “how nice” even though he previously mentioned that his father has criticized every gift he’s ever given him.

Raelene: My Favourite quote from this book is on page 82 when Sedaris is referring to the mortality of himself and his sisters. He talks about how they often see elderly people around their beach home and think about how that will soon be them. The quote is “How can that be, when only yesterday, on this very same beach, we were children?” I like the universality of this quote. I think in a way it sums up the human experience and how life happens too quickly.

Out of the collection of essays, which one did you most enjoy?

Kaylee:  I have quite a few favourite essays from Calypso and as Lorielle mentions below, they all sort of work with and build upon each-other. However, one that I found hit me personally was “Boo-Hooey”. In short, it started with Sedaris talking about how he hates when people bring up ghost stories and dreams (something I love) but then he goes on to talk about how he believes the dead can visit us in our dreams. He talks about how his mother and sister have visited him a few times and I related to this on a personal level. I truly believe when those who have passed on visit you in your dreams that they’re visiting you in real life and I liked that I’m not the only one who feels this way.

Raelene: My favourite essay from Calypso is Stepping Out. It’s basically about Sedaris’s obsession with his Fitbit and his constant need to increase his daily amount of steps. I definitely snickered my way through this one. I found the whole essay hilarious but also kind of sad. Its absurdity seems like an exaggeration of the truth, but I don’t think that’s the case. It made me understand his personality more and I’m positive that the Fitbit is a metaphor for something, I just haven’t figured it out yet.

Lorielle: Hmmmmm, I don’t think I have a favourite essay in the collection per se. I think each essay works with and builds upon the other essays in the book and that they are best enjoyed when read cumulatively. That said, there was one particular essay that involved a fox that I was quite fond of! I think it was the essay titled “Untamed”.

Kaylee: I would absolutely recommend this book. I honestly think anyone, male or female and at any stage of life would enjoy this book. Of course, you have to enjoy reading personal essays, have a penchant for dark humour and be open to some heavy topics…that are made lighter through sedaris’ wit.

Raelene: I definitely recommend this book to anyone who likes to read essays. Sedaris’s personal essays read more like small stories. They touch on heavy subjects but the subjects are made lighter through humour. If you’re a person who enjoys dark humour and essays about life/mortality, you’ll enjoy this book!

Lorielle: Yes, I definitely recommend this book. I think both fans of Sedaris’s books or newbies to his work will really enjoy his newest collection of essays. I particularly recommend Calypso to anyone who is looking for an authentically humorous read. Though Calypso deals with subjects related to Sedaris growing older, I was still able to enjoy and even relate to some of his stories. That is to say, don’t let the subject matter deter you from reading this truly great collection of essays if you’re on the younger side and think the book won’t be relatable! After all, the beauty of reading is its ability to give us perspectives from people who are different from us or at different stages of life.

Compared to the books you typically read, what did you think of this genre and writing style? Would you read more books by David Sedaris?

Kaylee: I’ve never read a book like Sedaris’ and I have to say that I throughly enjoyed it. I really felt like I was inside his brain at times. I laughed with him, felt for him and now desperately want to could sit down for a cup of coffee with him! I would love to read more of his books, especially now that I’m aware of his writing style.

Raelene: I usually read novels but within the last two years I’ve started reading books of essays. I think Sedaris’s writing style is definitely on the humorous side and as predicted, it kind of reminded me of Samantha Irby’s writing. Although, her writing comes from the viewpoint of a younger woman and Sedaris’s of a middle aged man, they both integrate humour into dark or heavy subjects. I think essays are really special because they enable you to experience life from a new or different viewpoint, while also still being relatable. I am definitely planning on picking up a few more of Sedaris’s books to read!

Lorielle: Compared to other books that I’ve read, Calypso was definitely a little different. I’ve read collections of essays before but only one that would be considered humour (Samantha Irby’s We Are Never Meeting in Real Life…also hilarious). Calypso, then, was a bit of a new genre for me to experience.

I have to say that I thoroughly enjoyed reading Calypso. The essays were funny, poignant, weird (in a good way), and even sad at times. I would 100 percent read more of Sedaris’s books! In fact, after I finished Calypso I went straight to Goodreads to see which of his books I should read next (though I still haven’t decided which one to read)!

Shop Calypso and our other book club picks here: