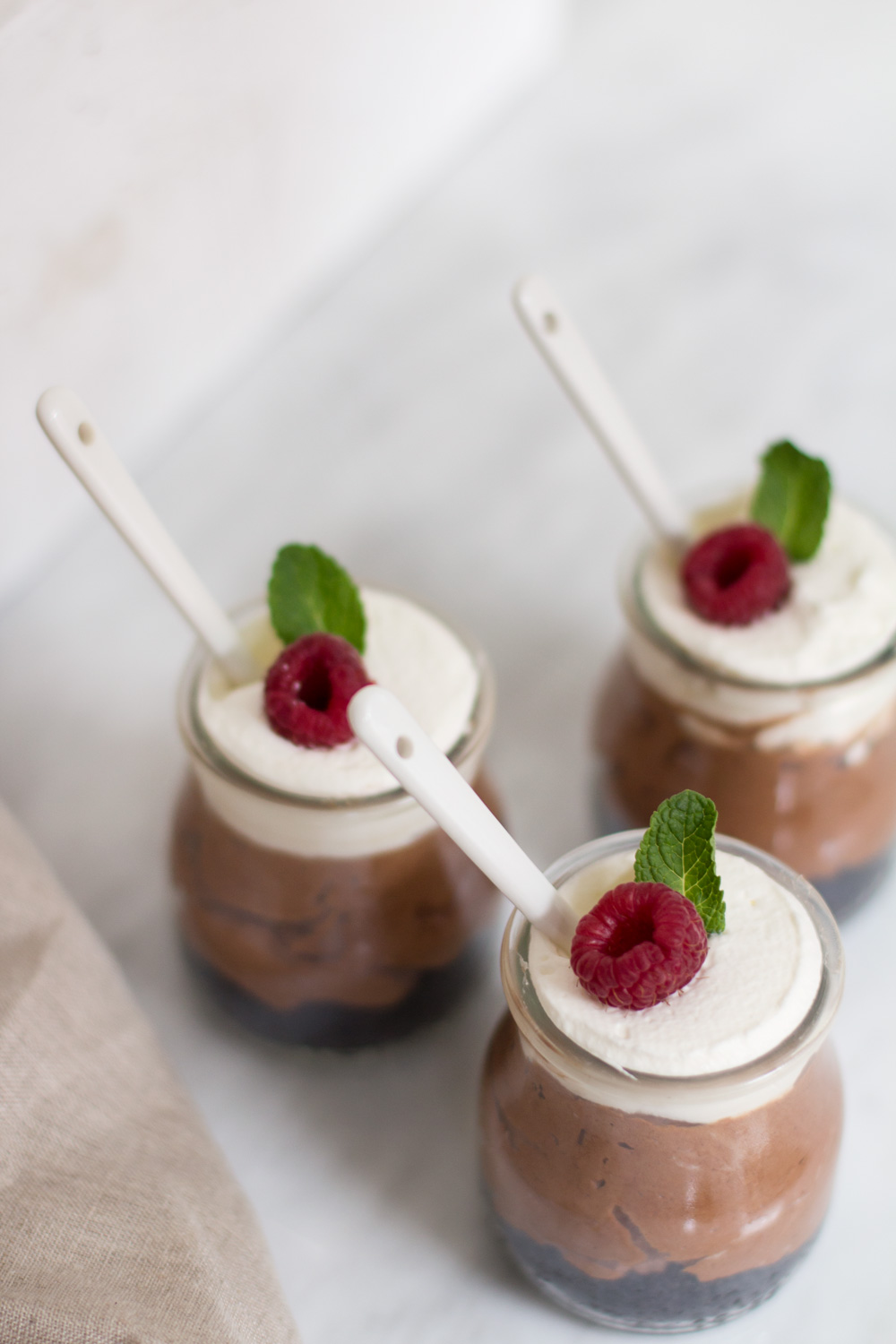 When January 1st rolls around, like so many others I make it a point to eat healthier. But there are some things I will never do and making a resolution to eat less chocolate is one of them. Depriving myself of such things just seems unfair, no? So when I had a serious craving for chocolate mousse last Sunday I whipped up a batch to enjoy later that evening. I served them in small but adorable jars which were also the ideal size for portion control. This was my second time making mousse (the first was last summer for Jamie’s birthday) and I have to say this recipe from the Wintersweet cookbook was not only simpler than the one I used previous but tastier. The mouse was perfectly light and airy just as a mousse should be and don’t even get me started on the chocolate wafer crumble…SO good! 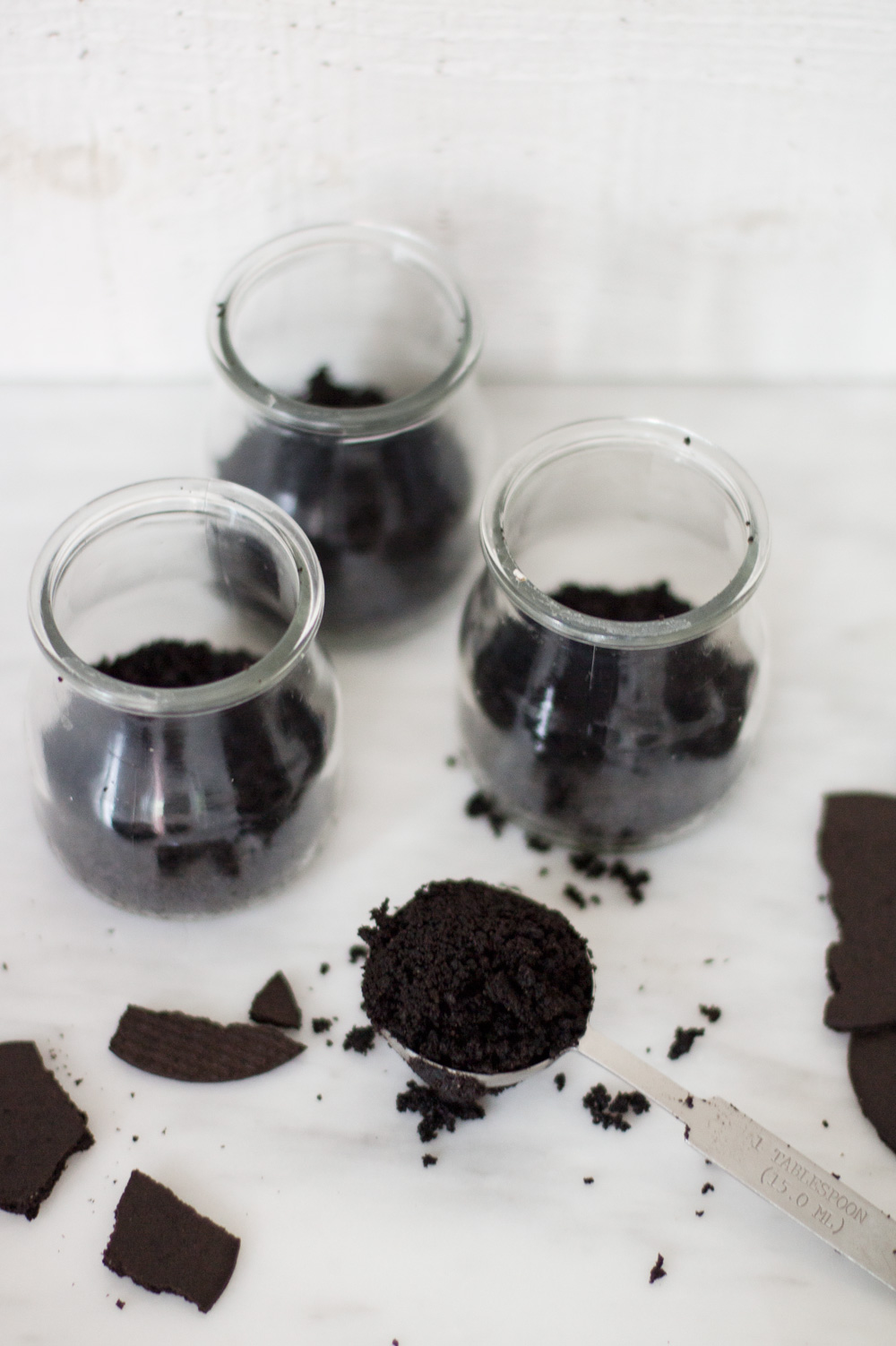 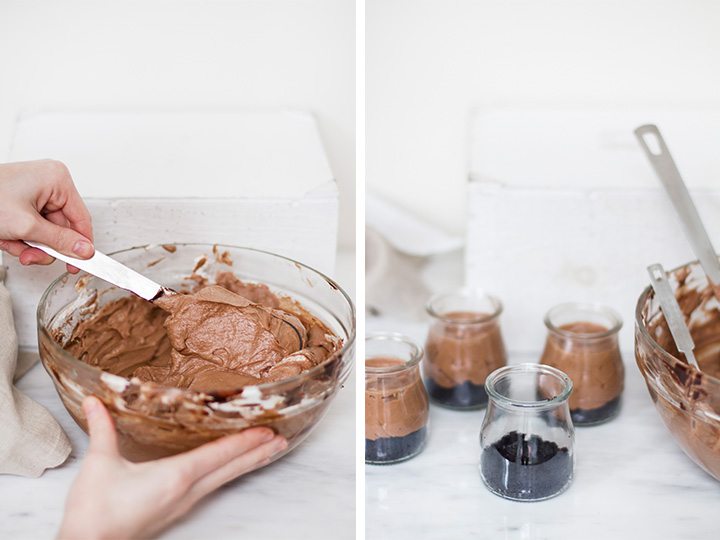 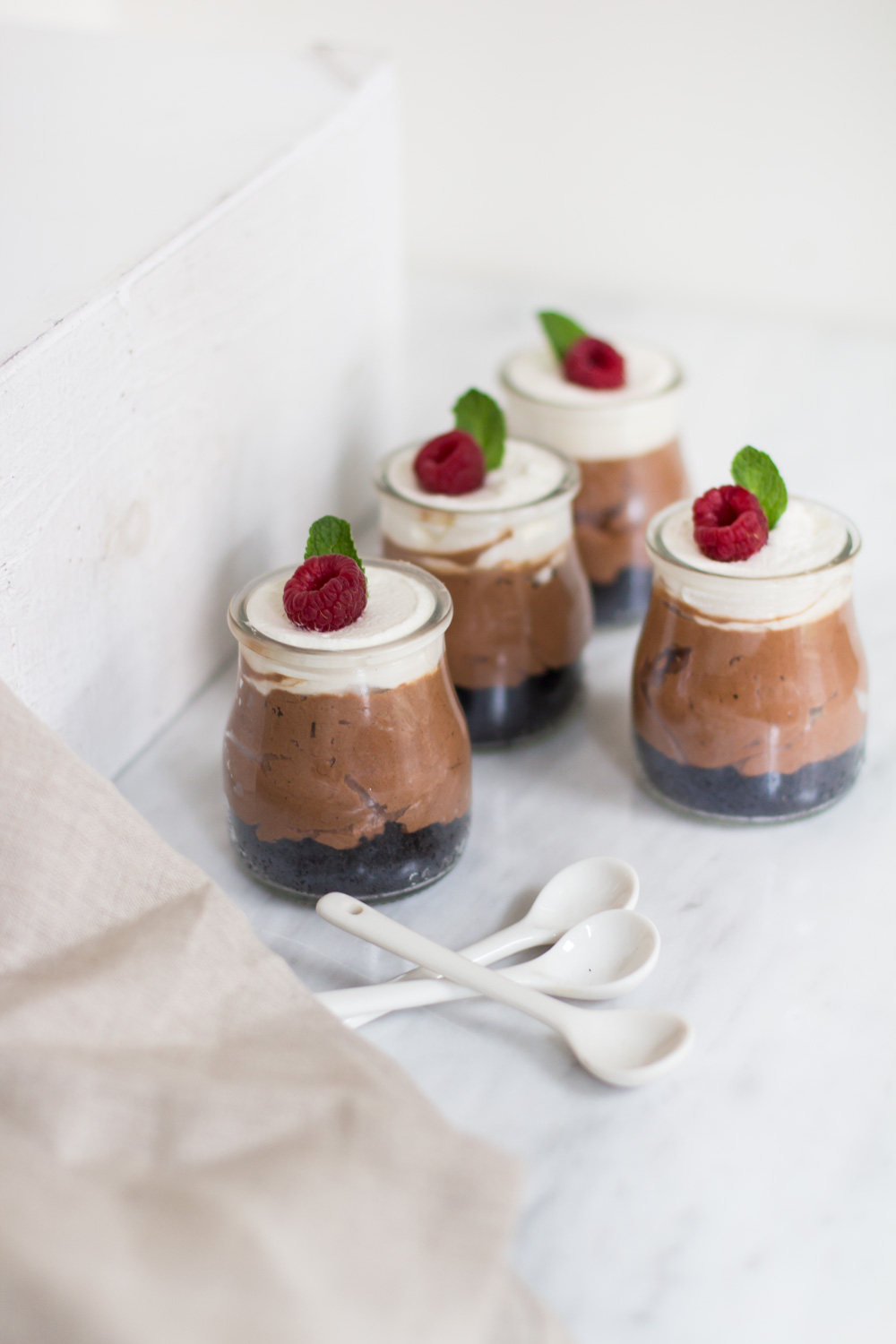 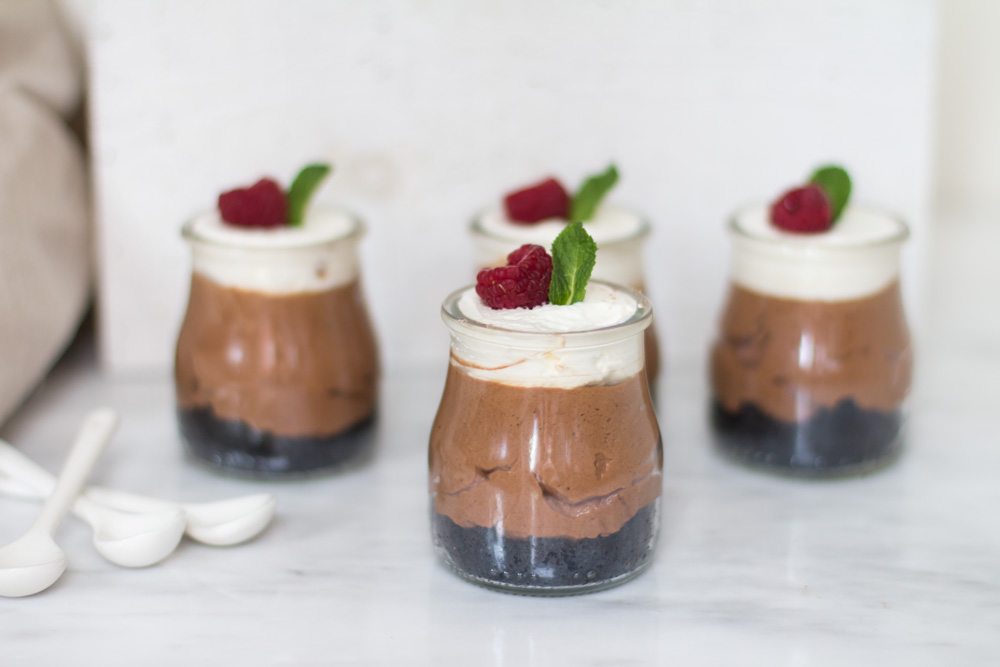 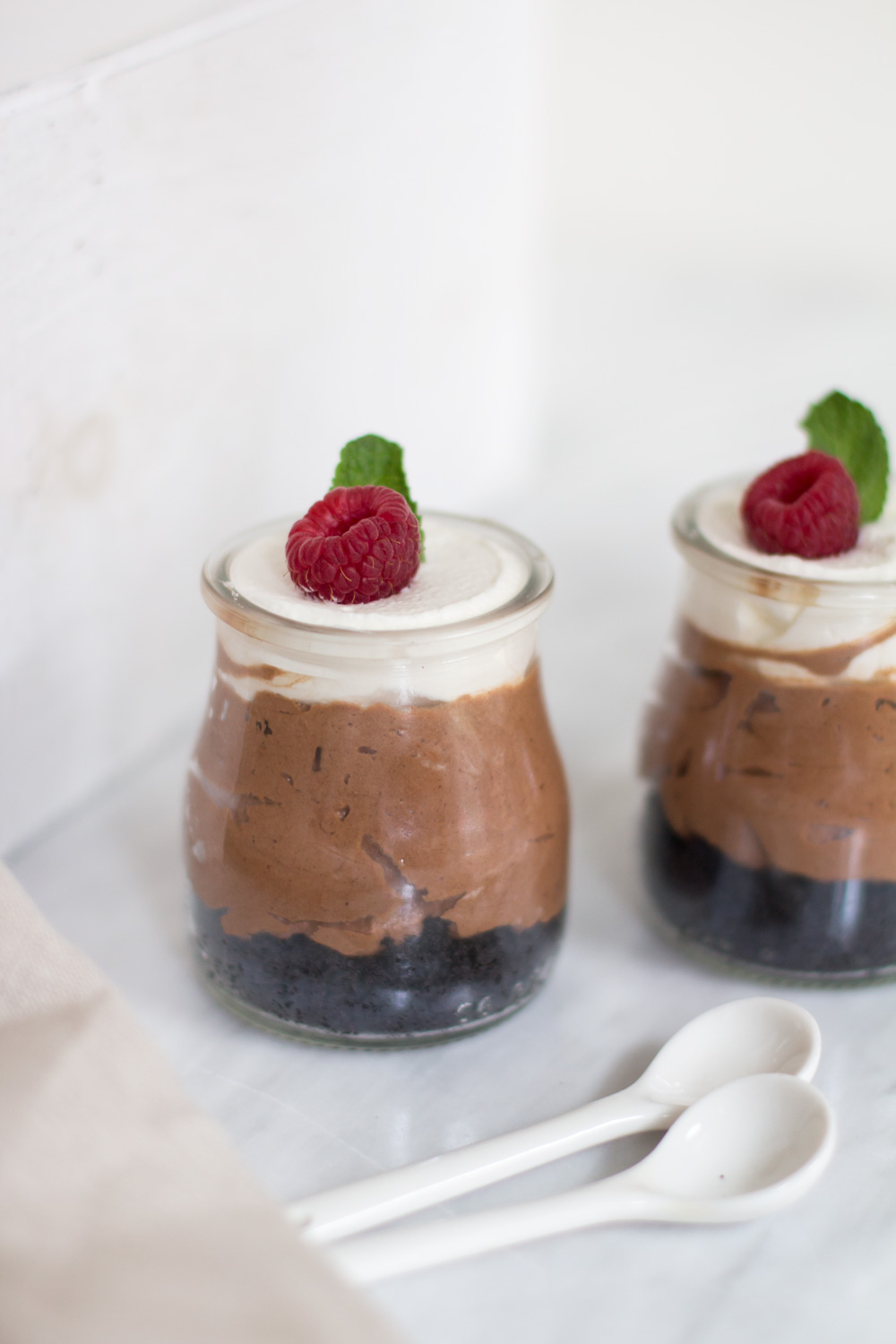 FOR THE MOUSSE:
combine the chocolate, vanilla and salt in a large bowl. heat 3/4 cups of the cream in a small saucepan to a low boil. when the cream is heated, pour it over top of the chocolate chips covering them completely. Allow the cream/chocolate chip mixture to sit for 1 minute and then whisk until the chocolate is fully melted and smooth. Cover the bowl and place it in the fridge to cool.

FOR THE CRUST:
Grind the chocolate wafer cookies in a food processor or blender until powdery (20-30 seconds). Pour the crumbs into a small bowl and pour the melted butter overtop of the crumbs and stir until combined. Scoop 1 tablespoon of crumbs into a small jar (mason or otherwise) and gently press the crumbs down with your fingers until a crust forms. Place the jars in the fridge to cool.

Remove the chocolate crust filled jars from the fridge and fill the jars about 3/4 of the way full with mousse. Move the jars back into the fridge until the toping is finished.

FOR THE TOPPING
With an electric mixer, whip the heavy cream and vanilla in a medium bowl until soft peaks form. Top the chocolate mousse filled jars with whipped cream and use a butter knife to scrape the top so that there is a nice, even layer. Garnish with raspberries and mint.

How To Make A Naked Cake

The Search For Bedroom Art