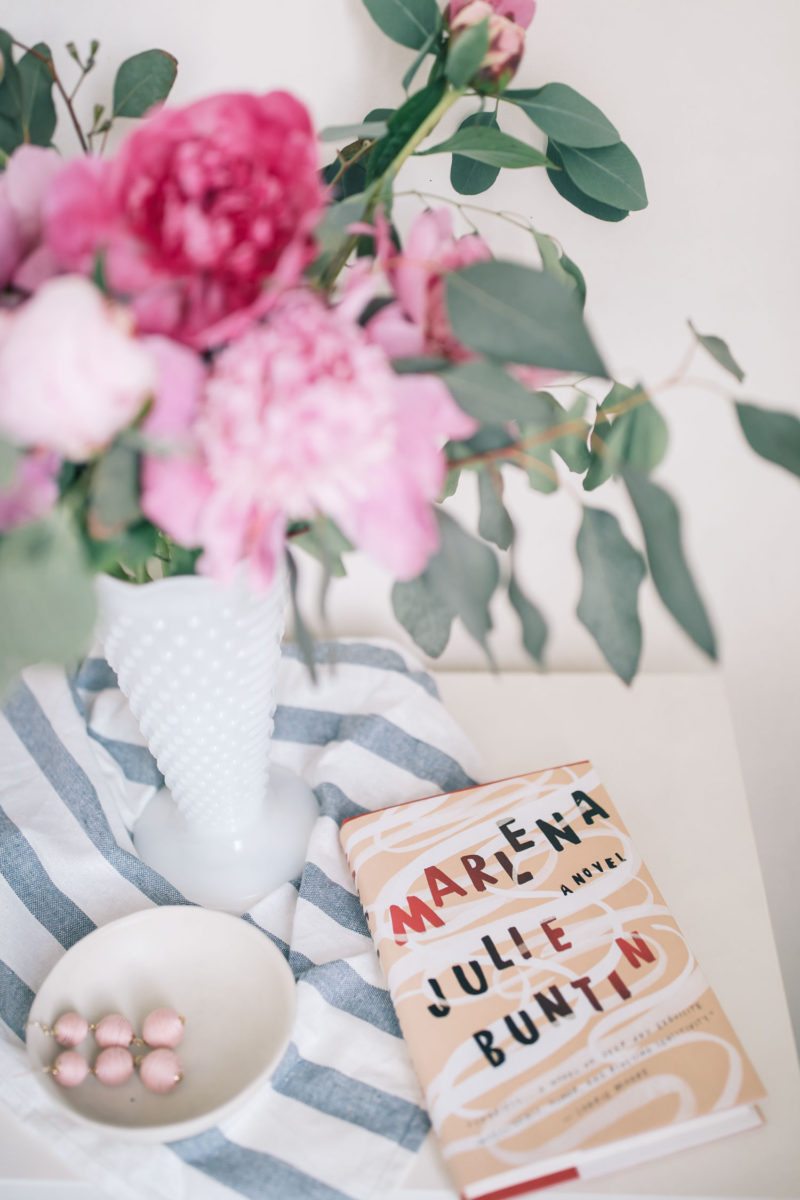 Here we are, the final book in The Blondielocks Book Club! In case you didn’t notice, I’m a lot late on publishing this post…my sincere apologies. While Lorielle and Raelene have been finished Marlena for quite some time, Personally, I found myself having a difficult time with this book (I’ll discuss more below). Coupled with that and the fact that the end of August/September got off on a busy foot I just couldn’t make it through on time. Luckily, I was able to finally get through Marlena a couple of weeks ago when we drove From Toronto-Halifax and back again and I’m happy to say that we finally have the review to share with you. This book club has been a ton of fun and I am so looking forward to hopefully bringing it back next summer. Until then, enjoy our review of Marlena.

Kaylee: Overall I enjoyed reading Marlena but I didn’t love it. At first, I had a hard time getting into it and I would say it took me until I was halfway finished to become invested in the story. However, once I was invested, I didn’t want to put it down which is where the 18-hour drive to Halifax came in hand. Marlena was a great book, don’t get me wrong, but for where I am in my life right now I felt like I wasn’t the target audience. If I was 5-10 years younger, I think I would have loved it.

Raelene: I loved this book! I read quite a bit of books this summer and this one definitely stands out as being one of my favorites! I love Julie Buntin’s writing style and read this book in less than a week. I was sad when I finished it, which is usually a telltale sign of a good book!

Lorielle:  I really enjoyed reading Marlena. As I’ve entered my twenties, I find myself reading beyond the young adult genre of fiction. While I still enjoy some authors writing in the YA genre, I’ve noticed that I’m enjoying books with more mature themes. However, I’ve also noticed that a lot of ‘adult-type’ books deal with themes that I just don’t relate to at all. This is where Marlena comes in. It is a book that is hard to pin-point because while a majority of the novel centers around the experience of Cat and Marlena as teenagers, it also goes beyond Cat’s 15th year and explores mature and dark themes. For me, it was the perfect book to read because it straddles the line between young adult and adult and exemplifies the sort of in-between-ness that is felt by many early twenty-somethings, including myself.

Kaylee: While the book is named Marlena, I would say that Cat is actually the main character and incidentally also my favourite. While Cat definitely had her own demons to deal with in her childhood which also carried into her adulthood she, for the most part, had a good head on her shoulders. I also found there was a so much in her childhood self that I could relate to when I was a teenager. I completely understood her rebellion.

Raelene: I think my favourite character is Cat. The book seems to be written in a way that makes Cat automatically your favourite character because she offers some relief from Marlena’s depressing life. Cat, for the most part, is an average teenage girl who holds a lot of angst. She is very relatable. I think my 15-year-old self would have been good friends with Cat!

Lorielle: I think the obvious answer to this question would be to choose Marlena and that would be a perfectly understandable choice. After all, the book is named after her. For me though, I think my favourite character is Cat. Unlike Marlena who, at first, is reminiscent of the ‘manic pixie dream girl’ trope Cat, as a 15-year-old girl, is utterly and completely insecure and unsure of herself. I found this to be a really realistic portrayal of being a teenage girl. In Cat’s eyes, Marlena was an idealized version of everything Cat wanted to be. Though this image starts to break down as the novel progresses and Julie Buntin does a great job of dismantling the problematic manic pixie dream girl trope, I just couldn’t relate to Marlena as much as I could to Cat. It is for this reason that Cat is my favourite character in Marlena.

Kaylee: I did enjoy the ending. if I remember correctly I think I shed a tear which I don’t often do when reading (not that I read all that much, haha!). I felt like everything was as tied up as it could have been and I had so much hope for Cat that she finally was going to get her life on track.

Raelene: I enjoyed the ending. I liked how the book was realistic in that it really could have been someone’s life. It definitely wasn’t a glamorized portrayal of teenage life, which I found refreshing.

Lorielle: Personally, I found the ending quite satisfying. It wasn’t satisfying in that the story was neatly packaged and all of the characters’ issues were resolved by the end but it was satisfying in its open-endedness. I like endings that aren’t exactly endings. That is to say, I like endings that allow the reader to imagine what happens to the characters once the book has ended. For me, Buntin achieves this type of ending and I think her ending is much more realistic than a neatly packaged one. After all, is anything in real life ever neatly wrapped up and easily resolved?

Marlena: Harley Graham (totally just googled 15 and under actresses on IMDB and she fits how I picture Marlena to a t!).

Cat’s Mom: Jordana Brewster (I just watched Lethal Weapon and she could totally play her!).

Lorielle: Hmmmmmm perhaps Chloe Grace Moretz (I definitely spelled that worng) as a younger version of Cat and Jennifer Lawrence as an older version of Cat. Maybe Jacob Tremblay as Marlena’s younger brother and Lucas Hedges as Cat’s older brother. As for Marlena…I honestly have no idea!

Kaylee: I would absolutely recommend this book but I do feel that Marlena is geared more towards someone between the ages of 16-22. Like I said, if I had of read Marlena a few years ago I think I would have enjoyed it much more. However, I truly felt for the characters, especially Marlena who just made me feel so sad. As Raelene mentions below, there are so many wonderful quotes that stopped me in my tracks. I’d still give it a 4/5.

Raelene:  I would definitely recommend this book. For me, it was the kind of book that demands to be read in a few days because every page is interesting. I also loved how it’s an adult novel but deals with teenage life in a more realistic and raw way, compared to a lot of YA novels. Specifically, if Marlena’s character was in a YA novel, the drugs, poverty etc. would probably be glamorized. I loved reading this book in my 20’s and, I think I would have loved it even more as a teenager! Also, there are so many good quotes!

Lorielle: Overall, I definitely recommend this book! Marlena is full of rich and complicated characters as well as a story that will stick with you long after you’ve finished reading it. I rate  it 4/5 stars!

Shop Marlena and our other book club picks here:

Fall Sangria With A Spooky Surprise

Textures In The Fall